Only Lovers Left Alive: Not Your Average Vampires

I didn't really know anything about this screening going in. I knew it was about vampires and it looked like a moody sort of drama from the pictures I had seen of it. But I wasn't expecting this film to be such a treat! Very interesting look at human nature through the eyes of people that have lived for hundreds of years.

The film is a romance about two vampires, one named Adam, one named Eve (haha), whose relationship has spanned centuries. Taking place in two completely different cities (Tangiers and Detroit), the story follows their relationship with each other as well as the things that happen while Eve visits Adam in Detroit. 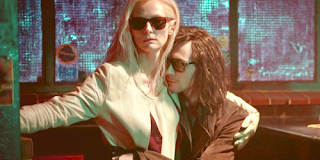 As some of you may have noticed, I'm a big fan of the supernatural and horror genres at the moment and I see a lot of scary movies that deal with vampires and similar monsters. But this was a total breath of fresh air. Instead of them being typecast as monsters, like we so often see in popular culture, their characters get to become fully formed through the lens of Adam and Eve's relationship. The whole movie has such a different vibe than any other vampire movie that I can really think of. They aren't battling werewolves for the love of a human being (the worst) and they aren't scary beasts that hunt people in the night either. The movie takes a very practical look at how a vampire romance would work. And in doing so, gives us a look at two vampires who are in fact very human. In the end, the movie really isn't at its essence a supernatural or horror film at all, but a romance. 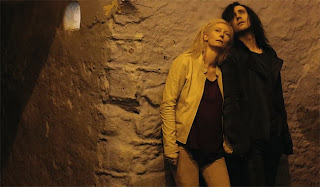 Adam and Eve's chemistry is fantastic. Tilda Swinton and director Jim Jarmusch mentioned that they didn't so much want to focus on the vampire element so much as the fact that that was the vehicle for portraying a centuries-long romance. Their focus was to try and portray what exactly a romance that long would look like, and it very definitely succeeds. Many times in romance movies (especially the supernatural ones, amiright?) there are major passions and dips, but this one achieves authenticity in the comfortability between Adam and Eve. Despite having loved each other for ages (or maybe because of this), they take enjoyment in doing mundane things together like playing chess, going for drives, and talking about old times.

Another thing that I loved about this movie was the humor it takes with its approach to vampirism. Avoiding cheesy jokes about how delicious people are (campy much?), they have intellectual conversations about the many famous and brilliant people that they've known throughout their lives with an off-the-cuff frankness that takes you by surprise. And things that are so often portrayed in horror movies as gruesome are put in laughably commonplace context. Filled with more giggles than I would've expected. 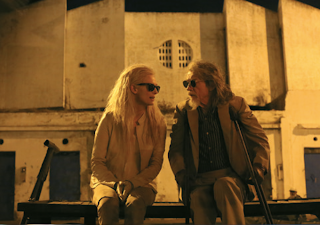 Including John Hurt as Christopher Marlowe

Only Lovers Left Alive also gives an observation of what humans look like from the points of view of two people that have been (consciously or subconsciously) monitoring their actions since the 1500s. At the beginning of the film, Adam expresses frustration with the "zombies" (as they call humans) and their inability to learn from the past. He then rattles off a list of human geniuses that have been either ridiculed or completely misunderstood and destroyed. It's fascinating to get a glimpse of what people of the past would think of us today.

Jarmusch's mise-en-scene* in this is also refreshingly different from the common vampire flick. Adding in his own elements of superstition (they constantly wear gloves and sunglasses when out), he also creates an open set that keeps them from getting bogged down in the gothic elements that so often make vampires seem menacing. On the contrary, the sets in this are very open, if cluttered, and as soon as night falls they roam around freely. Additionally the costumes are designed to look timeless, and the characters frequently add in garments that don't belong to this century at all simply because they're nostalgic. (One character constantly wears a waistcoat that he's had for five hundred years--because he likes it!)

Also, the soundtrack is incredible. A hodgepodge of original music that Adam makes (he's a very accomplished musician), rock, country, Motown, classical, and everything. This soundtrack is going to blow up.


All in all a fascinating and brilliantly made movie. I'd highly recommend to anyone.

(Also, the trailer's not out yet so this is the only clip I could find of the film. Gonna have to wait a while, guys!)


*So! You wanted to learn what mise-en-scene was! Mise-en-scene (meez-awn-senn) is essentially all that makes up the visual of the movie. The sets, the costumes, the music, everything that takes place in the frame. Arguably, it can also include sounds and music choices as well, but that depends on who you're asking. Here's more info on mise-en-scene: