Lots of Hollywood classics are getting reboots these days. But when you see a movie like Carrie, you're going to start asking yourself, "Why?" I went and saw Carrie the other night with my mom and found myself asking that very question.

Carrie, as most of you well know, is a story about a young girl bullied in high school. But this ain't your average nerd. Carrie (played in this version by Chloe Grace Moretz) has psychic powers and can make things move with her mind. She is raised by a single mother (played by Julianne Moore) who is insanely (pun intended) religious and mentally abusive. After a bullying incident turns into a revenge-fest for one evil-minded girl, Carrie absolutely snaps. But this isn't a girl who is about to cry over spilled pig's blood. Carrie then seeks revenge on the entire school's prom. 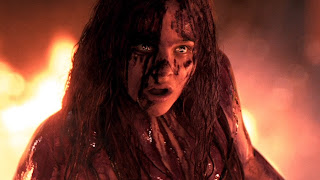 And it's scary.
Scary Carrie.

With this remake, I'm not quite sure what they were trying to accomplish. Maybe they thought that the 2002 remake was totally awful (which it was) and that the 1999 sequel The Rage: Carrie 2 was really stupid (again accurate), so they took it upon themselves to make a better remake. But though the movie wasn't bad, it wasn't as good as the original. I will never understand why some studios think "Hey! Let's revamp this one! Cuz I'm out of ideas!" 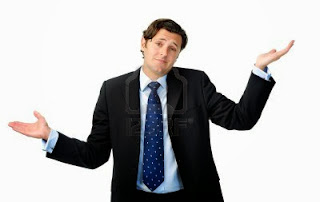 While this remake of the original Carrie is interesting in that it's modernized, it doesn't really bring much new to the table. They amp up the effects and hone in a little more on Carrie's relationship with her mother (as well as making some strange commentary on pregnancy and babies), but the movie stays a little stagnant. It seems to get so caught up in paying homage to the original that it forgets to build on it. Chris is turned from a regular bully into an entitled rich bitch, Carrie from a weakling into a girl testing her powers, and the mother from a bit of a joke to a woman with serious mental problems. But though these characters are magnified, the general reaction just boils down to, "Huh. That's interesting." 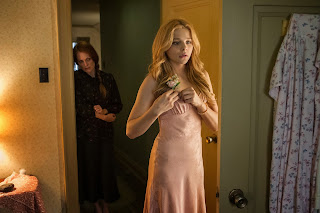 So uh...guess you're gonna go kill everyone at
prom now, huh?

Another thing I wasn't thrilled about was their choice of Chloe Grace Moretz for the role of Carrie. As someone in my office put it earlier, "She's not Carrie, she's Hit Girl!" Moretz is hard to see as the wallflower Carrie, though I honestly tried to give her the benefit of the doubt in the beginning. Although she plays the role with less passivity than the original Carrie (using and practicing her powers in her own home and against her mother), she lacks the believability of someone that's really been kicked around. And really, if I may be completely honest, her looks harken more to the popular girl that we see in Kick-Ass 2 than Sissy Spacek's original Carrie. 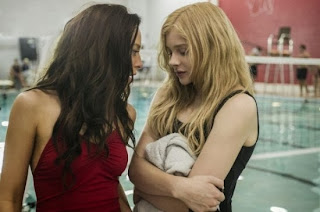 The one thing that I did find interesting about Moretz's Carrie is that she's totally conscious of everything that she's doing throughout the entire movie. While Spacek's Carrie massacres her prom unconsciously, almost like she's in a trance, Moretz's Carrie takes visible joy in manipulating those that have before hurt her. Could be a comment on the way current bullies handle being pushed over the edge...

Long story short, it's too same to be different and it's too different to be same. Carrie doesn't bring much to the table that you can't get from the first one, but the effects are neat and it'll probably appeal to a younger audience.