Poltergeist: A Letdown of a Remake

Let me just straight-up say that I was not expecting this movie to be a winner. First of all, why anyone would attempt to remake anything done by Steven Spielberg is beyond me. Second of all, when you try to remake a movie like Poltergeist, you can't just slap a bunch of the regular horror fodder on the screen and expect people to be okay with it.

The family (don't remember their names) has just moved to some development somewhere because the dad (Sam Rockwell) has lost his job as an executive at John Deere (somehow, the director wanted to get some product placement in there?). Anyway, the fam is freshly moved in and weird stuff starts happening (how craAaAaAazy!) like the little boy's room has a creepy little room in it filled with boxes of old clown dolls, the older daughter's iPhone gets fried, and some other less creepy stuff. Then (as if I had to say it) little Madison gets sucked into the TV and all hell breaks loose (pun intended). As the family tries to get her back, enlisting the help of a university's paranormal investigation team, they learn more about the sinister nature of the land they now own.

Here's the thing: the original Poltergeist is a classic horror movie. And it's not really because of all the freaky stuff that the house inflicts on the family within it: it's the family itself. The chemistry between all of them, the false sense of normalcy that hovers over them, the way they band together when Carol Ann goes missing, the way that the parents love each other, and even the connections that they make with the various people that try to help them. It's great acting. And it's scares that have nothing to do with immediate threats of danger, and everything to do with saving their kids from evil. And that is what's missing from this remake.

There is no chemistry in this family. Roles are played flatly and even bit parts that are supposed to endear them to the audience fall to the wayside as the parents get bewilderingly glib after their daughter disappears. 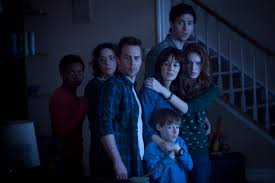 "Wow, in the TV huh? Weird. We should probably get her out of there. At some point."

Additionally, and this is a bigger problem with horror movies these days in general, they make everything WAY too complicated. We don't care that the family has no money. We don't care that the dad lost his job. We don't care why you moved here. We actually also don't care that you moved here at all. In fact, I would argue that it is the absence of conflict that makes the original so scary and so unsettling, and the excess of conflict that makes the newer version so boring. The family'd been living in the house for a while in the original, making the scares that much more random and unexpected, while new house horror isn't exactly groundbreaking.

Actually, I think that is my general problem with this movie. It tries too damn hard at something that came across as effortless in the original. The thing that so many neglect to acknowledge about good horror--especially otherworldly horror!-- is that it doesn't demand a lot of complexity. The nature of it is that it's inexplicable, so the goal of the director shouldn't be to make the inexplicable especially complicated. We should have the gist of what it is and then get absorbed by the performances and the scares.

The original Poltergeist can be summed up in two sentences: "Our daughter just got sucked into another plane by an evil presence in the house. We will do anything to get her out of there."

By contrast, the new version would go something like this: "We really have no money right now and this house is all we can afford and weird things are happening oh man where'd our daughter go... Good thing we never interact with anyone outside our home. Wait, let's enlist some paranormal experts. Here's some jokes about paranormal things, haha, we are all surprisingly well adjusted despite the fact our daughter is lost in the spirit realm--wonder how she's doing in there--anyway, here's this guy to explain what's happening and give us a haphazard way to get her back, some serious CGI effects, blah blah blah, some thoughts about the nature of fear, aaaand welp that's all folks!" 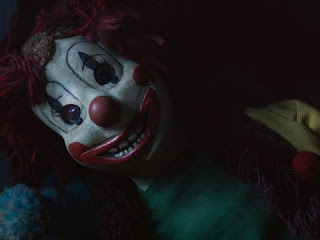 why would you not get rid of those -- NOT NORMAL. ENOUGH WITH THE
WEIRD SCARY DOLL TROPE.)

4 outa 10. Not the worst I've seen but comparitively just a terrible idea.

The D Train is one of those rare flicks that I saw without knowing anything about it outside of the trailer. Ths ticket was free and it had James Marsden in it.

In hindsight, I should've done a bit more reading.

The plot follows Dan (Jack Black), a run-of-the-mill kind of guy who married his high school sweetheart, took a job out of high school, and had never moved away from his hometown. He is trying to oganize his upcoming 20-year high school reunion. Understandably (because who really thinks about high school that often when you're in your late 30s), he's having trouble getting people into it. But a ray of hope appears in the form of his former classmate Oliver Lawless (James Marsden), who he sees in a national commercial for Banana Boat sunscreen. Flying to California to try and recruit him, Dan weaves an intricate web of lies to get Lawless to come. But um...Dan may have bitten off a bit more than he could chew... And Oliver might not be the guy that Dan idealizes anyway. 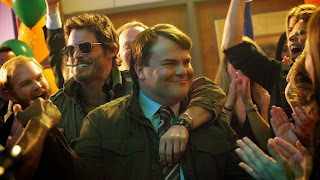 Talk about opposite ends of the spectrum...

I really don't think I can do it without spoilers, so here we go:

BELOW BE SPOILERS, YE BE WARNED

I don't know whose idea any of this was, but I was not into it.

Like who wants to see Jack Black have sex with anyone, let alone the impeccable James Marsden? The shock factor is significant, and while it tries its best to make this black comedic moment funny, I really just did NOT see it coming and felt like the aftermath read as unrealistic. Well...not as unrealistic as James Marsden having sex with Jack Black...but pretty unrealistic.

Okay, I had to get that off my chest, let's try to analyze this without mentioning it ever again.

Here's the thing: the movie tries to make a commentary on how we all feel after high school without giving us any context to how high school actually was for Dan and Oliver, and that is a damn shame for two reasons:

It's hard to sympathize with these characters when we don't know the circumstances that lead them to be who they are in the present. We also don't really get a lot of context for who they were in the past. Consequently, we see Dan become increasingly, and SO UNCOMFORTABLY, obsessed with Oliver's lifestyle and coolness, which just grosses us out, and we see Oliver reveal himself to be more and more of a terrible human with each scene, which isn't very fun either. 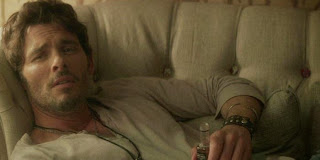 Though he IS pretty fun to look at...

Like, I get it. The end game is that no one in high school (or life even, if you wanna go down that road) is as self-assured as they seem. Cool kids are usually harboring troubles of their own (if we are to learn ANYTHING from John Hughes movies) and nerds feel underappreciated.

It's hard to shed the identity that you develop as a teenager, but you don't have to hold yourself to that standard. There's more to life than being well-liked. You just gotta find your groove.

At least, I think that's what it's saying. I got distracted by a PARTICULAR SCENE (spoiler-readers know what I'm talkin' about...)