Two Movies About Venice: One Good, One Bad

While most of my reviews tend to be about movies currently in theaters, I frequently retreat to the back alleys of Netflix in attempts to watch things that I've never seen before. This past week, in a strange twist of events I ended up watching two different movies both set in the Italian waterscape of Venice. Since they both had this in common, but had completely different subject matter, I'd thought I'd take the opportunity to contrast them.

The plot of this movie reminded me a lot of Shirley Valentine (which I would also highly recommend). I'm not exaggerating when I say that I found this little gem on Netflix two years ago and it's been waiting patiently in my queue ever since. Well last week I finally got bored enough with cable to check it out and it was really cute. 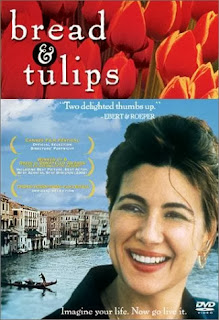 Kind and somewhat meek housewife Rosalba is on a bus tour of Italy with her family (they are all Italian, btw; this is an Italian film). After dropping her wedding ring in a rest stop toilet and having to fish it out, she takes so long in the restroom that the bus leaves without her--and her family doesn't even notice! Deciding to show them she then decides to hitch-hike home and have a staycation while she waits for her family to return home. But after one of the drivers spills that he's heading to Vince (where she's never been), she decides to tag along and see the city for herself. After finding (platonic) residence with a sad older man named Fernando, getting a job with a local florist, and connecting with neighbor Grazia, Rosalba gets back in touch with a side of herself that she hasn't seen in a while. As she drifts further into finding herself, however, an angry husband gets suspicious of what exactly it is that keeps her in Venice and away from her family. 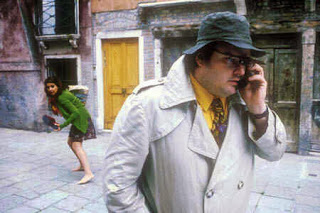 So he hires this would-be detective to bring her back.
With mixed results.

This movie was really sweet. Rosalba (Licia Maglietta) is kind of a klutz and a bit of a dreamer when with her family in the beginning. But seeing her interact, almost like a child, with the crotchety/sad/manic residents of Venice is just very sweet. And her impact on the people that she encounters seems to do them all extreme good. Almost seems like a reversed coming-of-age movie, instead of the usual dreary sense of accepting adult duties, Rosalba needs to remember what it is from her childhood that made her happy and return to those things. The mystical realism in this, as well, is really quirky. Rosalba's frequented by nightly visitors that suggest her subconscious and picking apart what these interactions mean is fun. 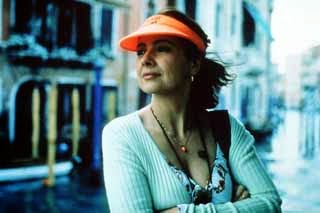 Bread and Tulips offers a beautiful image of Venice as a magical city that enables you to discover yourself. The magic in this movie is tangible and sweet and it comes full circle at the end in such a gratifying way it almost feels like a kid's movie. 7 outa 10.

Woof. Okay. So after I watched this entire movie and still found myself saying "whaaaaat...just happened..." I wikipedia'ed it and it looks like we've got a classic case of Ulysses Syndrome. But I'll get into that later. First, plot: 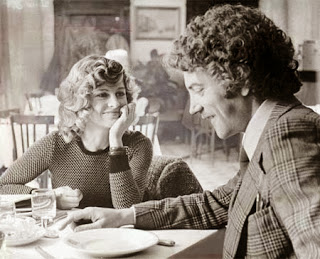 They really should've discussed who got sole
custody of this haircut...

Mr. and Mrs. John Baxter (Donald Sutherland and Julie Christie, respectively) have been rocked by the sudden accidental death of their daughter, Christine. So, just like any normal couple would do, they move to Venice. Duh. One day, while having lunch at some cafe, Mrs. Baxter bumps into two elderly sisters, one of whom is blind and claims to be clairvoyant. As Mr. Baxter waits for Mrs., unalarmed, for what seems like an hour to come out of the bathroom (maybe men had no idea what girls did in the bathroom in the 70s?), the clairvoyant lady tells her that her daughter was standing behind them while they were eating and she was laughing. Not creepy at all, right? So this apparently gives Mrs. Baxter a whole big sense of closure and clarity that her daughter's alright and then the movie ended.

Then strange things happen, including them seeing a child running around in a raincoat similar to Christine's, John Baxter almost falling twenty feet from some scaffolding, him imagining that he saw his wife when she'd just taken off that morning to go see their son (who apparently exists 45 min in) and a bunch of random stuff that doesn't seem to have any correlation to one central plot. Also weird (and somewhat harrowing) were a graphic sex scene to the tune of 60s jazz flute, a drowned girl randomly being pulled out of the canal, and REPEATED OFFENSES OF FOREIGN LANGUAGE WITHOUT SUBTITLES. 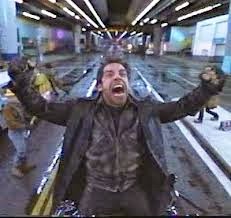 If there's one thing I don't like to feel during a movie, it's confusion.

I have seen art films before and I find them interesting, knowing that they're art films. But this...thing doesn't seem to sway one way or the other. With classic 60s flute jazz and sweeping soundtrack contrasting a very bleak and cold-looking Venice, there isn't hardly any clarity or emotional investment to this movie. 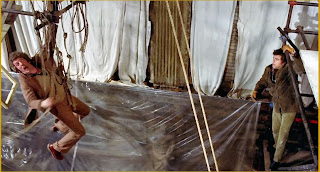 Oh man. Hope you don't fall. I feel so connected to your
curly-coifed character that--ohh look, I found a quarter...


But apparently I'm missing all of the humongous themes in it like (according to Wikipedia's article):
"its primary focus is on the psychology of grief, and the effect the death of a child can have on a relationship. Its emotionally convincing depiction of grief is often singled out as a trait not usually present in films featuring supernatural plot elements" [Which is totally bullshit to mine eyes because what thriller revolving around the loss of a child DOESN'T feature a depiction of grief? Hellooooo? Pet Sematary, Dark Water, The Others, The Changeling, I could go on. Maybe this is the first example? But come on...]
Classic case of what I would like to call The Ulysses Syndrome. English nerds everywhere should already know what I'm talking about. Ulysses, a book by James Joyce, is split down the middle between people that absolutely abhor its bewildering unexplained narrator/style/content changes and people that claim it as the smartest and most fascinating thing that they've ever seen. Seems like I'm part of the former half of people on this movie. Maybe I'm just lazy, but I did not like this one. 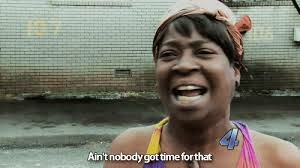 Don't Look Now. More like Don't Watch Ever. 4 outa 10 (an added point only because I feel stupid for not realizing it had a higher agenda).

Also, Donald Sutherland, I'm sorry but no one wants to see you naked. Not even 40 years ago.

Even the trailer doesn't make any freakin' sense....