The Supermarket Says It's Halloween, So Here's Some Scary Movies

Around this time is when I start getting my seasons muddled. The calendar says it's August, the weather is telling me it's time for back to school, and my supermarket says that it's Halloween. 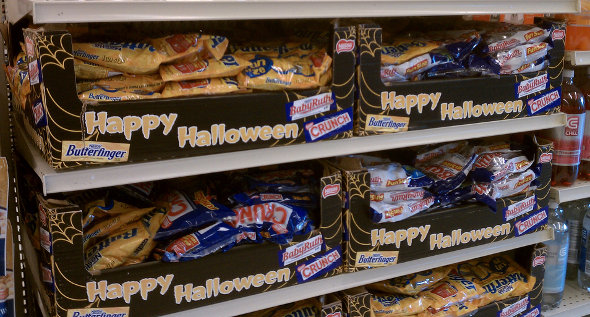 However, since I'm feeling particularly autumny today, I thought I'd share some trailers that I'm looking forward to scheduled to come out between now and Scary Movie Season.

I mean, first of all, it has Rachel McAdams in it. Second of all, it has Noomi Rapace in it. Also it looks like a corporate murder drama that reminds me of both All About Eve and American Psycho.  Got okay reviews, but I'm mostly just curious to see how it ends. Who doesn't like a good murder mystery?

If you haven't seen this trailer yet, you clearly haven't been in a movie theater and/or in front of a TV in quite a while, have you? Well, either that or you can't handle the trailer and so shut your eyes/change the channel. This latest installment of the highly creative horror movie follows Mr. Lambert as he struggles to eliminate the dark spirits that have followed him after the first movie's conclusion. I'm dying to see what the deal is with that freakin' horrifying old woman.

Different flavor of horror film a la Open Water. Sandra Bullock is an astronaut that gets hit while repairing something on the outside of a space station and is left to drift in open space waiting for someone to rescue her. Not a bad idea, but I'm curious to see how they'll take a nightmare like this and stretch it out over an hour and a half without losing the audience. Also a little hard to tell from a teaser preview like this though. Disclaimer: not for the motion sick.

Mixed feelings about this one. If you've ever seen the original movie, it's going to be hard to warm up to this remake. I'm especially confused about why they picked Chloe Moretz for the title role. That girl's pouty mouth and pretty face hardly harken to the image of the original scrawny ginger, Sissy Spacek. Still, I'm intrigued by Julianne Moore's role as Mrs. White. And the special effects in this one should be a step up from the original for sure, which should make for some pretty scary stuff.

This movie. So torn. I feel like similar to Let the Right One In and its American remake, Let Me In, this one is going to get rave reviews at the expense of a movie that's already been made. The original Oldboy, a South Korean masterpiece of creep-cinema, is the finest case of cinematic mind-fuckery (pardon my language, but really, that's the only way to put it) to date. It will be interesting to see if Spike Lee can deal with the fact that the fans will be watching his every move. I'm also really interested to see if he'll keep the original ending. If you're ever looking for a movie that will leave you uncomfortable for an entire week, watch the original.

Welp! That's all I got. Why is it that scary movie season is getting so sparse these days? What a serious bummer! More scary movie reviews in the archives and foreign horror also found on this post: http://largepopcorn--nobutter.blogspot.com/2011/10/top-ten-foreign-horror-movies.html.

Also, dear readers, I am always willing to take suggestions from you guys. If you think there's a horror movie coming up that I've missed that you'd like to see reviewed, let me know. Last year I ran out of horror movies so if y'all could help a sister out this time around I'd be much obliged. Thanks!