Haha, okay, cheesy joke, but we were making it throughout the previews and all day today so now it's become associative. Yes, I saw the latest futuristic dystopian doodad in theaters and here's what I have to say: 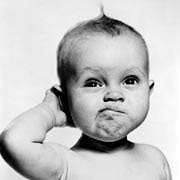 As an avid reader of graphic novels and comics (shut up.) I gotta say I wish that they had simply made a graphic novel, comic series, or even TV series about this idea. It has so much potential and I feel like it got marketed wrong and just kind of...missed the mark. And when it could've been really interesting too!

For those of you that haven't seen the trailers, the film is about The United States, recently "reborn" by some new founding fathers. In this new "utopia" (-cough-DYSTOPIA-cough-), unemployment is at an all-time low, along with murder and other crime. The reason? The Annual Purge. The Annual Purge is a day that allows people to release aggression and animosity by murdering people, looting, and participating in all kinds of crime while the government turns a blind eye for a full twelve hours. Great idea right? Just like communism! 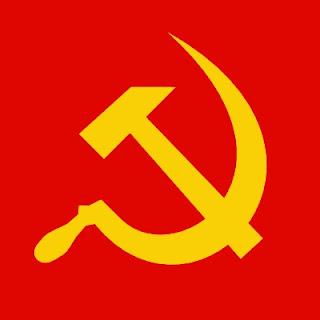 It could totally work! Y'know, as long as you totally ignore
human nature and morals and rights...it's a GREAT idea!

SO in the backdrop of this day in 2022, the day of the annual Purge, we have a family of four in the upper-class suburbs. The Sandins are a regular ole family, the dad sells security systems, the mom is a housewife (I think...), the daughter is an overachiever with boyfriend problems, and the son is a sensitive gizmo-freak. Normal, perfectly normal. And in the normality of every year beforehand, they shut themselves into their own home and lock down for twelve hours while the purge happens outside. 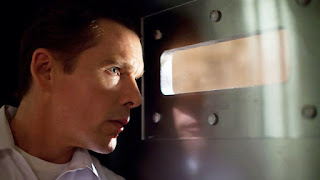 That is, until they let a fugitive into their home and all hell breaks loose. During a commotion that occurs when the man is let inside, the family breaks apart (in more ways than one) and is set into a sequence of events that could damage the family forever. Visited by some psychotic twenty-somethings after the man inside (for apparently no other reason than the fact that he is homeless) they are given the opportunity to turn the man over. But after they lose their window they are invaded by this group of weirdos and must defend themselves alone. Interesting plot twists keep you on your toes, even until the end.

So, let's get down to brass tacks: did I like the movie?

What I liked about this film is the fact that they thought up this idea at all. How often in politics are people convinced that something is GENIUS when, in practice, it ruins most of the beauty of humanity (again, communism: great on paper, horrible in practice)? The "new founding fathers"have introduced a principle that everyone has thought of at least once in their lives, even fleetingly, and gives them the chance to carry it out without repercussions. The people in the film seem to use this principle as a right, making it all the more horrifying. Neighbors openly sharpen machetes, security cameras pick up friends in camo with machine guns "going out hunting" and yet nothing is to be done about it. Because it is legal, people don't seem to put up a fight against the moral fabric of killing someone. The rich, especially are highlighted in this movie as taking the opportunity that the Purge offers to clear riffraff off the street, such as the homeless, the poor, and people that would be the most defenseless when push came to shove. 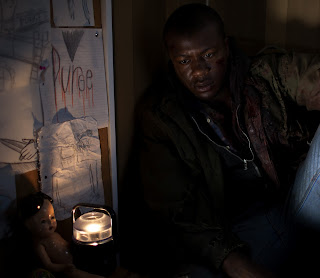 The movie therefore gives an interesting perspective (from the rich) when they are faced with the possibility of saving a man on the basis of the fact that he's human, and not on his economical status. In that sense, the movie is a great commentary on classism and government.

What I DIDN'T like about this film is the limited way that they play with this crazy idea. For a theory this big, you could've brought in SO many different elements. I would've loved to see a multiple-storyline film with one person in the ghettos, one cop, one rich family (such as the Sandins), and one other grab-bag character. That would've been CRAAYYY. Or even a storyline that goes outside the house. One of the things that makes the plot so crazy is the fact that you have no one to call for help except your neighbors. And yet, limiting a family to a house with no way out is something that you see in horror films ALL THE TIME. When a Stranger Calls, Panic Room, Cabin in the Woods, Evil Dead (-shudder-). Literally, ALL. KINDS. of movies use broken phone lines, absent cell signals, and downed power to make it seem like there's no way out. So I feel like it could've been a little scarier if they had gone outside the house. 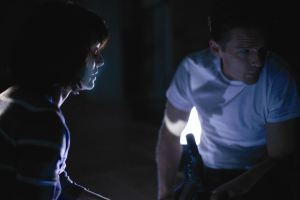 We have no power, so we can't call the cops---oh wait, irrelevant...

The other thing that seemed to piss off a certain someone that I saw the movie with was the fact that it was not scary. This movie has been marketed as though it's a ripoff of The Strangers, or other scary serial-killer movies that have people sporting masks in them. These kids, however, are amateurs. And for all their creepy swinging in swings, they are no match for a double-barreled shotgun. 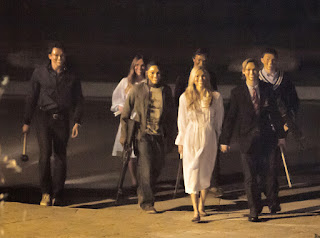 Seriously, if you block off their masks, it's just a bunch of yuppies
doing some night time house repairs.

I had a lot of feelings about this movie, but my top feeling is frustration that they didn't do more with this idea. I think it still would make an excellent comic series, but as a two-hour movie it somehow doesn't go into the depth needed for such a controversial topic.