What is it about documentaries? Why are they always so good? I got invited to a free screening of this documentary today and since some plans I had were cancelled I ended up using this to fill up my evening. 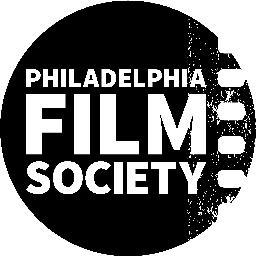 Big ole shout-out to my fave society for the hook-up.


The movie is about Orca whales, but this is no National Geographic wildlife study, or version of Oceans with a Morgan Freeman voiceover. It's a study on aggressive behavior in Orca whales due to years in captivity, largely focusing on Sea World and their malpractices.

Wow, I actually don't think I've ever done a documentary review before...a little unsure as to how to proceed here without my "plot" section...hmm...Well, let me just tell you a little about the subjects that they hit on during this film.

It begins talking about a period of time forty years ago when people started capturing random baby Orcas around Washington. The guy talking about it likened it to kidnapping a child from its parents. Apparently, Orca whales' brains are said to have enormous similarities to human brains, including an extremely emotional part to them that makes them form strong relationships. Orca whales actually are so tight-knit to their own families in the wild, that children hang out with their moms for their entire lives. They never separate. So taking these babies away from their parents is devastating to both the mother and the parent. And it's a practice that Sea World continues today, permanently ripping children from their mothers for exhibition all over the different resorts in the country. 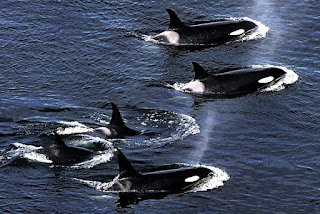 It's okay though, guys, these Orcas are wild and happy and free!
(Also I don't believe they allow capture of them anymore)

After capture, the whales were then taught obedience and tricks during the day, and shut up into smaller areas at night. Again, since Orcas are so tight knit in their own families, this group of different Orcas being thrown together at random is at first very dangerous for whoever the new guy is. The whales fight for dominance and, since they are limited to fighting in a very small pool with no easy way out, many harm and sometimes even kill one another. 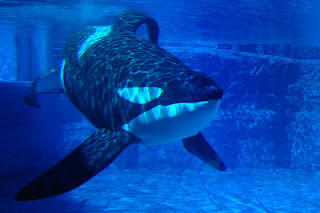 The movie also examines the very real danger that the Sea World trainers are in while dealing with these animals. While in the wild there has never been a reported case of an Orca attacking a human, there have been over 70 attacks in Sea World's history and a few fatalities as well, most notably being Dawn Brancheau in 2010 at Sea World in Florida. 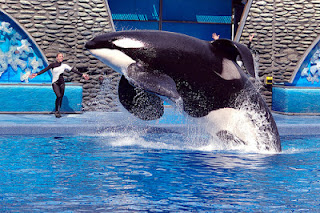 The psychoses that these animals develop as a result of being kept captive in unnatural conditions, the movie theorizes, therefore breed resultant conflicts between trainer and animal. The effects of stress make the animal frustrated and it can randomly act out, with sometimes fatal consequences.

For anyone interested in learning more about these kinds of inhumane practices against sea mammals, check out www.emptythetanksworldwide.com. Additionally, there is going to be a protest (I learned during the Q&A) on July 27th throughout the US in front of assorted aquariums and Sea World sites.