The Rebound: Not as Dumb of a Romcom as One Would Expect

When Netflix recommended to me the film The Rebound the other day, my first thought was "oh goody! A mindless romcom!" But the movie ended up surprising me more than just a little. In the same vein as a movie like Something's Gotta Give, The Rebound starts off making fun of itself, but then takes a serious turn.

Housewife Sandy (Catherine Zeta-Jones) is a perfect suburban mom. She makes pies, drives her kids to school, and makes sure that there is always hand sanitizer around. But when she discovers her husband is cheating on her, she hightails it out of the suburbs and heads for the city. 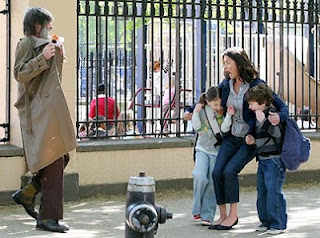 Apparently, this happens a lot there.

Living over a coffee shop with her two kids, they befriend one of the baristas and he ends up nannying for them. But as Sandy gets more and more frustrated with dating and closer and closer to Aram (Justin Bartha), they both start to wonder where their relationship will take them. The only problem? She's forty and he's twenty five. 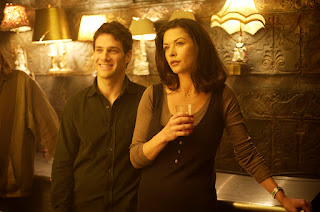 Not that you can tell...Jeez...someone give me this lady's genes...

The movie takes its time with putting them together, even though the whole title suggests that (duh) they're going to get together at some point. Sandy goes out on horrible dates and Aram can't seem to connect with the ditzy girls that are his own age (offended.), so they end up hanging out with each other half the time. When they finally get together you'll be screaming "YAY!" (hopefully in your head and not actually that loud). Zeta-Jones and Bartha do a great job of being real (surprisingly for such a low-profile movie) and the kids are hilarious. 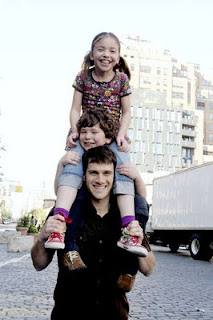 What seems to trip their characters up is the opinions of their friends and the hardships of dealing with societal agism, which is interesting in itself. Not that anyone hasn't even heard of a couple being significantly far apart in age. I'm sure everyone knows at least one couple that's a little far apart. But in recent years,  cougars seem to be becoming a cool thing. And surprisingly, people seem to be okay with that (seriously, look at Hot in Cleveland, Cougartown, and even Desperate Housewives). In fact, older women seem to have a higher capacity for serious relationships than girls my own age (well, at least on film). And in this film, Sandy and Aram provide a commentary that suggests that age old saying that "Age is just a number".

Seven out of ten stars. Also the ending is adorable.