So, this may come as a surprise to you all, but when I'm not typing my fingers to the bone for all y'all, I am babysitting an adorable 10-year-old named Kate. Now, Kate was a little miffed at me last week because I got her all excited two weeks ago after I told her I had Finding Nemo and that we could watch it on Friday. Well, guess who forgot Finding Nemo? Yup. 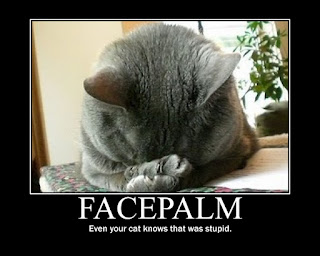 So in order to make it up to her I told her I would take her to see Madagascar 3. Her eyeballs almost popped out of her head. So we went to the theater, got our 3D glasses on our heads, and sat back for some good old-fashioned fluff.

Oh my god, guys. It was hilarious.

Now, I am not the biggest fan of the quality of animation that the Madagascar movies use. I'm probably just spoiled by the beauty of all of Pixar's movies but Madagascar always sort of weirded me out a little (for one, why is Alex's mane shaped like a diamond?). Even after seeing the first one somewhere a few years ago it never really stuck out in my memory. But this third one really takes the cake.

I'm pretty sure I was laughing harder than Kate was. 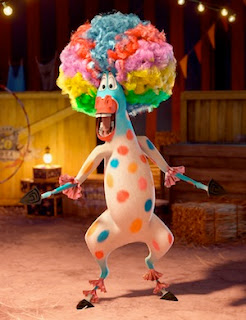 The plot takes off where (apparently) the second one left off, with the animals escaping Africa to find the penguins and their army of monkeys in Monte Carlo. Once with the penguins they plan to use their flying machine (I guess it's an airplane?) to fly home to NYC. But while they are trying to escape, the keep getting intercepted by French animal control freak Dubois, who is on their tail (haha puns...) for the rest of the movie. 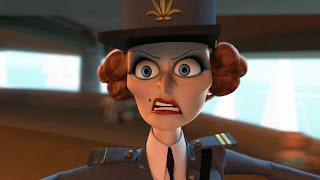 At one point, while trying to escape her evil clutches (don't worry I can tell you about it cuz it's relatively in the beginning), they hop aboard a circus train headed for its next gig and join them under the guise that they are, in fact, from an American circus themselves. The plot then continues with Dubois trying to track them down and with the animals "teaching" the circus animals how they do things in the "circus americano". 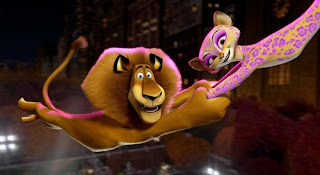 As with all truly worthwhile kids movies there is enough adult fodder to keep you awake if the cutesy cheap laughs aren't getting to you (you weirdo). That being said, the movie isn't all cuddles and rainbows and learning about friendship. They make some pretty clever jokes that have some pretty big laughs. Madagascar 3 isn't afraid to be ridiculous and in a world full of tear-jerkers like the ones that Pixar keeps churning out (still have yet to see Brave), that can be so refreshing. If you're tryina guffaw all night, watch Madagascar 3.