Dude. What the heck, Ridley. Got me all excited to see this crazy movie you cooked up as a not-quite-prequel to Alien. You had a pretty cool trailer with some nice lookin' camera work, had a foreboding foghorn sound that reminded me of War of the Worlds and pre-freaked me out, looked like some good actors. But alas. You join the ranks in creating a lackluster and unimpressive add-on to a classic movie. You oughta be ashamed of yourself. 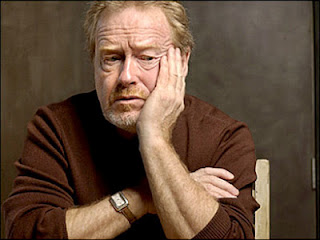 Alright...primary outburst has been finished. We may now begin with the actual opinion minus the fueled disappointment.

I really did have great expectations (Dickens? Anyone?) about this movie. It looked like it had a new and interesting cast with some plot twists, alien civilizations, and mystery. But unfortunately, Scott doesn't quite make the masterpiece that he intended.

Prometheus is the name of the ship that doctors Shaw and Holloway (who are also married, btw) take to the far reaches of space to try and find the Engineers, the things responsible for the creation of mankind. Along with them for the journey are various other scientists, pilots, and crew members, including Meredith Vickers, the person under the man funding the expedition. But as soon as they arrive on this planet they run into trouble. While finding evidence of humanistic creatures, they soon find that there is another darker creature lurking there too ($50 if you can guess!). 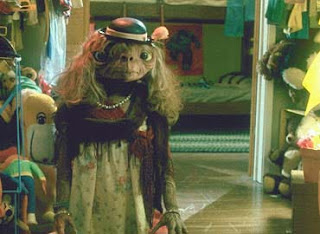 Nope. An even darker creature than this.

While the sets and imaginativeness of the whole thing are really quite interesting in this film, I feel like it totally lacks direction. It seems to be caught between wanting to tell the story of the creation of the thing in Alien and playing with the idea that humans are not alone in the universe. The latter is really the more interesting story, I think. Or at least a little less explored. 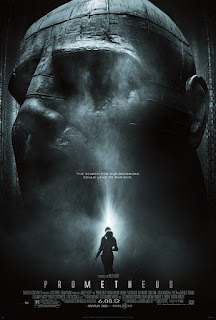 I mean doesn't the poster kind of suggest that it's gonna be about the Engineers?

But the storyline ends up getting convoluted in the director's attempt to stuff everything into this one film. It ends up being kind of a curve ball to the viewer, attempting to wrap their mind around first one storyline and then the other. Very cool how Scott fabricates the creation of the Alien in a somewhat believable fashion, but disappointing in that it creates an incredibly deep plot point and then ends up sort of saying "we'll probably get back to this in a sequel". He should've focused on the Engineers in this one and gotten to the Alien prequel next, or vice versa, if you ask me.

Another disappointing element was the fact that unlike the original Alien, Prometheus seems to forget about its suspenseful beginnings. Although it starts out promising, the film gets preoccupied with its characters searching for answers and any horror element is turned into a more action-y one. Would've liked to see more actual scariness.

Not a horrible movie, but pretty disappointing and a little confusing. 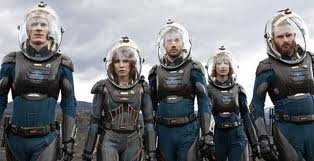 Now, don't look at me like that, I'm just being honest..