I had seen the trailer for Bernie weeks ago and was immediately intrigued. And with the art theater's tickets being cheaper than the ones I would've gotten for The Avengers and such, I was leaning more towards seeing Bernie. So when my fellow film nerd Nicholas came to visit me last weekend (yes, last weekend; I know, sorry, I've been busy, kids) I was like "Bernie?" and he was like "Okay!" So then we skipped merrily to the subway and got ourselves to the Ritz East. 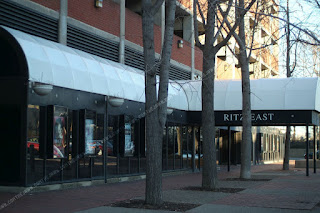 Each theater is surprisingly big for there only being two of them. Anyway! Bernie.

Bernie is the tale of a charismatic, Southern assistant funeral director (played by Jack Black) who is liked by his entire town. He's a sweet, giving man who has nothing but concern for others in his heart and wants to make everyone feel special. So when he tries to comfort the wealthy, newly widowed Marjorie Nugent (Shirley MacLaine), the town isn't surprised when Bernie starts trying to cheer her up. 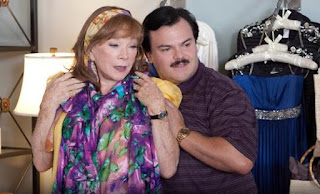 Purple's not your color, honey.

But when Bernie starts to get suffocated by Marjorie's need for constant attention and care, he snaps and, in an out-of-body moment, shoots her with an armadillo gun. The rest of the plot follows the trial as the town defends Bernie's innocence, despite his own confession that he indeed shot the woman and then kept her in a freezer for six months.

So, going into this movie, I had NO IDEA that it was based on a true story. Like, actually. And the way that they set it up is in little segments ("Bernie", "Was he gay?", "Did he do it?", etc) and then by playing vignettes of Bernie's actual life backed up by commentary from the townspeople.

Honestly, the performances by Jack Black, Shirley MacLaine, and Matthew McConaughey (as the prosecutor) are amazing. They play roles that they've done before (Black as the flamboyant, MacLaine as the grouch, and McConaughey as the ballbuster) but they do it all with such attention that I feel like it's worth talking about. Black is absolutely charming as Bernie (I was hoping they weren't gonna convict him either!) and MacLaine is a totally awful human being as Marjorie Nugent. 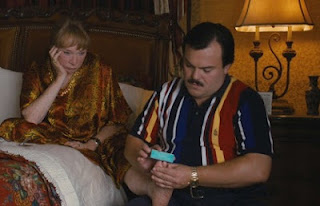 Seriously. Who does this.

But the real stars of this movie are the townspeople. I was trying to figure out for the entire movie whether they were the real people or actual actors. Turns out that some of the real townspeople are actually in the film (whaaaaat) and the things that come out of their mouths are what make this movie so funny (are we allowed to say that about a crime movie based on real events?). You can get a little taste of what they're all like in the preview, but my god, it's some hilarious stuff. 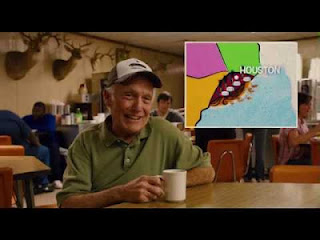 This guy was my personal favorite.

The weird thing about this movie is that, after discovering it was based on a real murder, I'm a little confused about the genre. I thought that it was a dark comedy when I saw the preview (and I guess it still kind of is?) but it seems kind of weird. I guess another thing that the director was going for was to just show the dramatic effect of what would happen with a positive mob mentality. The entire town is literally convinced that he didn't do it, to the point that they have to move the trial to another town to prevent a biased jury. It also provides interesting commentary on the death penalty and the morality of killing someone who doesn't seem to have a good bone in her body.

Interesting and guilty-pleasure kind of funny. Don't go in expecting to laugh your head off, but expect to be swayed to the townspeople's side. It's cray.