Last time I went to an indie movie (The Artist, ahem, ahem) I saw the preview for Albert Nobbs and was immediately intrigued. First of all, period drama is one of my favorite genres (see Sense and Sensibility, Emma, the BBC version of Pride and Prejudice, Mansfield Park, and the BBC series Downton Abbey. You won't be disappointed.) and I was really intrigued to see one set in Ireland, a country which is usually overlooked. But let's not, of course, also overlook the fact that the film is centered around Glenn Close as playing Albert Nobbs himself. 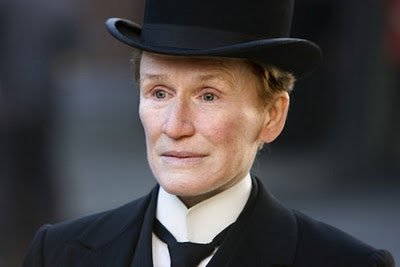 The man(?) himself
Yes, children. But don't misunderstand, either. Glenn Close isn't merely playing a pants role, where the audience is supposed to overlook the fact that the man on screen is in fact a woman (see Mary Martin in 1960's Peter Pan). Rather, the movie investigates the "what-if" scenario of a woman passing as a man in late 19th century Dublin.

When the movie begins, Albert Nobbs is a waiter at a high-end hotel in the middle of Dublin. He is an odd man, but not overly so. He is quiet, courteous, and obliging but seems somewhat clueless as to his own humanity. The first time the audience sees him speak is only about matters of money, and he seems somewhat isolated from the rest of the staff. As the movie moves on, it becomes wrapped up in how lives like Albert's may have indeed happened and the possibility of him reconciling his secret with the joys of a somewhat normal life.

Honestly, this film was fascinating. Albert Nobbs is a character with a brilliant sort of androgyny that doesn't make you think of him as a woman in drag, but nor does it allow you to fully embrace the character as a man. This seems to be a direct result of Albert himself not really knowing (or seeming to care, other than of course being found out) whether he is acting as either sex. In fact, the circumstances surrounding Albert's initial choice make it so that he almost chooses the androgyny of being neither male nor female. Whereas being a woman was extremely dangerous (especially if you were alone), being a man was safe in any number of ways. 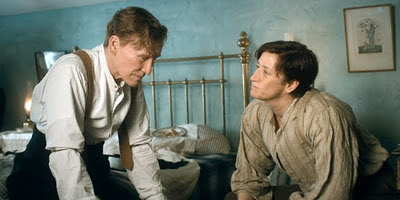 In fact, I would argue that this film is almost equally about the hardships of the lower class in the 19th century as it is about the complexities of gender-bending. Both characters masquerading as men (yes I said both, keep your eyes open for the second one!) only come about doing it as a result of their lower class situations. Mr. Page (I guess the jig is up) becomes a man as a result of losing the ability to have children and Albert (SPOILER ALERT) becomes a man after first being gang raped and then needing money.

The other two main characters, Helen (Mia Wasikowska) and Joe (Aaron Johnson), also seem to be direct victims of their class. Being basically deprived of most comforts, they seem to reach out to each other without really caring what the consequences are (and boy oh boy are there consequences). 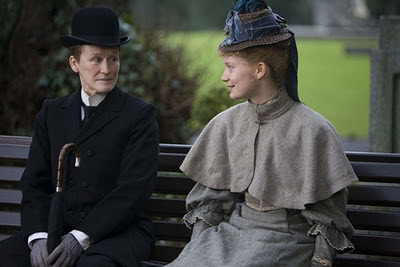 What do you mean "kiss"?
I haven’t seen such a unique movie in a while, and for that reason I would recommend seeing it. Also, if for nothing else, please see it for Janet McTeer’s portrayal of Hubert Page, which is one of the most brilliant performances I have ever seen on screen (in fact, I would even go as far as to say that she outshines Glenn Close’s Albert Nobbs).

Also, the music in this is to die for. Check out the theme song, sung by Sinead O'Conner and the trailer: