So I feel like I owe you all at least a half-assed attempt at an Oscar-related post, but uh...I feel like I should clarify something. For the people that checked back on here to see news of Oscar glory, I apologize to you, my loyal readers. Aaaand, here it comes....

I did not watch the Oscars. 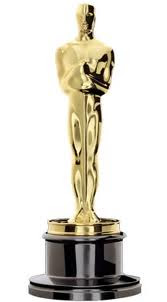 Stop looking at me like that Oscar!
Ok...there. I said it. Now, in explaining why I missed out on the Oscars, I'm gonna ask you all a question:

If you were so obsessed with movies that you actually had seen like half of the movies that they were rooting for in the Oscars, don't you think you'd rather be watching an awesome movie than some dumb award show?

So what was I doing the night of the Oscars, you ask?

I mean, REALLY, how often is Aladdin on TV!?

Plus, I knew The Artist was going to win everything anyway. The only thing I'm a little disappointed about is Octavia Spencer's win on Best Supporting actress instead of either Janet McTeer for Albert Nobbs or Melissa McCarthy for Bridesmaids. Here's some reminders of these performances if you missed them:


Octavia Spencer in The Help:


And who could forget Melissa McCarthy in Bridesmaids? Freakin' hilarious man:


Until next time my buckaroos!
Posted by annie_J at 5:16 PM