So a while back in May, I had the extreme good fortune to witness a Blockbuster shutting down. Not that seeing a place where rental movies are sold is anything awesome really. To tell you the truth I kind of wish there were a few more left around, but I guess that's what Redboxes and libraries are for (I mean really, any rental under $2 is frickin bomb, I don't care who you are). No no, the reason that Blockbuster shutting down is awesome is because I got about ten movies for $10. 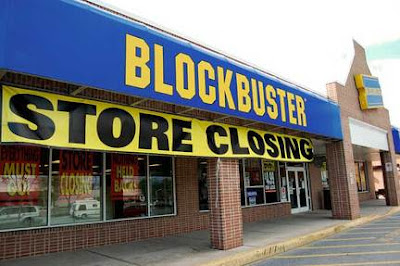 Sad? Maybe. But can you smell the savings through the screen? I know I can!
I went back three times. Ironically, though, then summer started off with a bang and I never got the chance to watch any of them because...well actually I'm sure I had plenty of chances to watch them, but I kind of forgot about them. Oops.

But anyway, since recently budgeting my funtimes (it's a word) money, I've been diving right into these puppies and finding a whole bunch of interesting films that I completely forgot I had.

Number one today was a movie called Thirst (Bakjwi in original Korean). 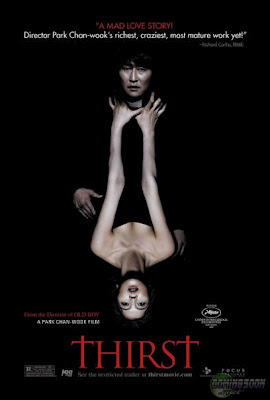 Fun fact: They edited something out of this poster cuz it was too suggestive apparently
Directed by Chan-wook Park, master of the messed up and responsible for fascinating skin-crawlingly disturbing movies such as Oldboy and Lady Vengeance. Let it be known, he makes no exception for Thirst.

Thirst follows the story of a priest getting turned into a vampire. Father Sang-hyeon is a really nice guy, playing the recorder for dying people, working in a hospital, trying to help people. But he is made sad by how many people he can't help. So what does he do? He volunteers to be a medical experiment, testing a vaccine against a disease called EV. Side effects of the disease are skin blisters, fingernails fallin off, and vomiting blood (can you say FUN?). So the vaccine they're testing doesn't end up working and he ends up gettin a blood transfusion and then dies. 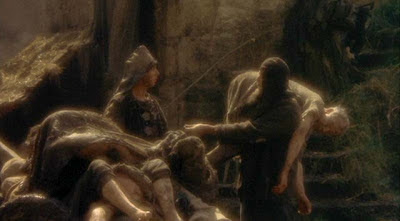 He's not quite dead...
Sang-hyeon soon finds out that the blood donated to him was laced with vampire blood, making him not only immortal but a new creature. He starts to question his religion and his celibacy after meeting Tae-ju, the wife of a man he healed. After being invited over to Tae-ju's home (which she shares with her mother-in-law as well as her husband), there are some heavy graphic shenanigans between she and Sang-hyeon. Faced with new ethical questions after not only breaking his vow of celibacy, but also drinking human blood and committing various murders, the movie becomes almost more about the morality of being a vampire than the actual usual horror story. 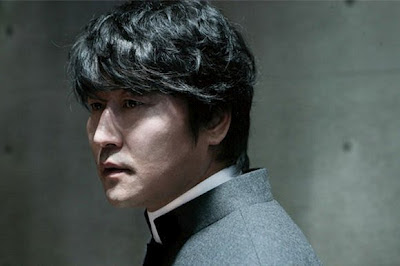 Doesn't get much more classic than stories about human nature does it?
Much in the same vein as films like Let Me In, Thirst seems to focus more on questioning the humanity of vampires. Since they are technically inhuman and practically immortal, how does this change the nature of their being? Sang-hyeon goes from being a genuinely nice person to an adulterer and even a murderer, trying to find out how to survive without hurting people at first, and then slowly giving into his animalistic tendencies. As Tae-ju asks at one point "Is it a sin for a fox to kill a hen?", and the film really seems to play with that idea. Since they need blood to survive, is it really immoral to be killing these awful people around them if it keeps them alive themselves?

Perhaps the only thing that bugged me in this movie (and, really, most of Chan-wook Park's movies, if I'm being honest) is the awful squealing, selfish girl who ends up being Sang-hyeon's love interest. I don't know if it's the language barrier or her attitude in general, but she ends up being a rather selfish and sociopathic person who does nothing but cause trouble. 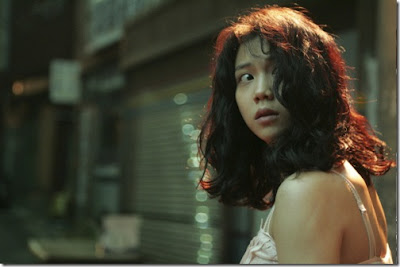 Don't look so innocent, you know you screwed shit up.
A very thought-provoking movie that studies human nature, morality, and sacrifice. Also it's South Korean, which (if you happened to see my entry on foreign horror) happens to be one of my favorite nationalities for foreign movies. Check it out!