So before 2012 started up, my good ole friend Josh came to visit (publicity plug, you should check out his NYC blog: http://krigman.blogspot.com/) and we went to see The Artist! I'd been hearing things for weeks about this film and I was ready to find it highly enjoyable, but I was never expecting what I got to watch. 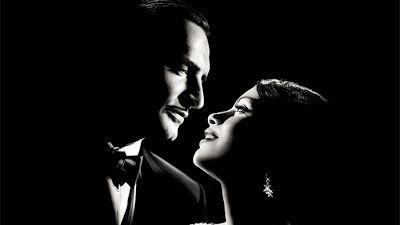 Totally buying this poster.
Have you ever been so psyched that you feel like you can feel your blood flowing? You get really still, listen your hardest, and don't move your eyes in anticipation. And then some indescribable awesomeness comes at you fast and you try to hold onto it for as long as humanly possible before it melts away into less intense, enjoyable familiarity.

I rarely get this feeling anymore. Maybe I'm a jaded, unemployed twenty-something or maybe I just haven't been able to see real, true beauty for a while, but The Artist gave me some silver lining.

The Artist is made by movie people and it shows. This film gave me what I imagine sports people feel when their team wins the Superbowl. You've been waiting and waiting and waiting for some incredible display of awesomeness and THERE IT IS!! WOOO!!! OH MY GOOODDD!!!! 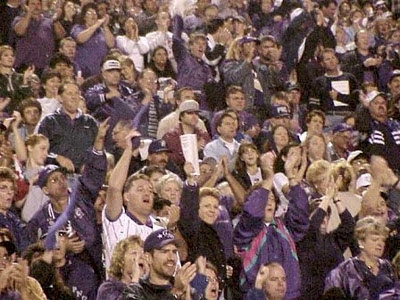 This is a movie theatre probably.
But ok, backing up and calming down, for those of you who have no idea what this movie is, The Artist is a piece of sincere romantic poetry for the lost art of silent film. The entire film is done in the style of a silent film from the 1920s (yes, close your gaping jaw, the movie has only a musical soundtrack with virtually no other sound...AND IT'S AWESOME! Sorry, calming down...). The story starts in 1927 with George Valentin (Jean Dujardin), a debonair movie star at the top of his game, accidentally helping virtual nobody Peppy Miller (Berenice Bejo) launch her career in Hollywood. Despite having obvious chemistry (the sequence of their reshoots is adorable), George and Peppy part ways after their only film together. Peppy’s career gets bigger as her roles move from being an extra to being listed in the credits. George’s life moves on as usual, despite he and his wife having obvious problems, and his career is as good as ever. 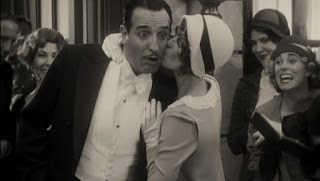 Ready, set, publicity stunt!
Then comes the advent of sound. Ignoring the “fad”, George sets out to create his own movie in the traditional silent style while Peppy stars in a new sound film called “Beauty Spot”. While there is nothing wrong with George’s film, Peppy’s movie leaves his in the dust, and while her career takes off, his is left a shambles. The remainder of the story is largely about George finding where he fits in the world of new cinema, following Peppy’s success on a parallel story line which (frequently) crosses with George’s own. 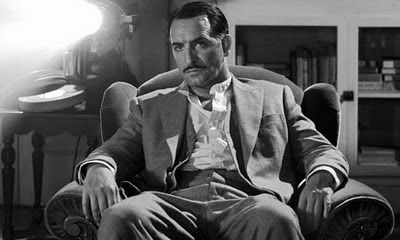 Womp womp.
The acting is fantastic! I had never really considered how different acting could be without sound. Of course anyone could spot the difference between the over-the-top antics of real silent films from the 1920s and the understated drama of being able to hear even the slightest sigh in typical cinema today. However, seeing modern actors without their voices was really fascinating. Additionally, I had also never seriously considered how culturally androgynous people are in silent films. Without being able to hear accents (George and Peppy are French! Represent that.), people at once become more relatable.

Stylistically, the film is so loyal to following a silent film mold that sometimes you catch yourself thinking “What the heck is John Goodman doing in the 20s?!” 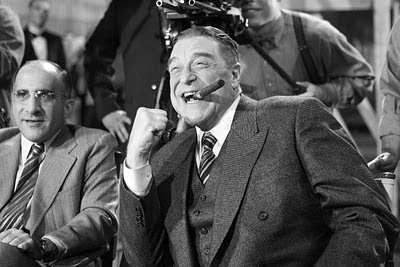 Seriously, share your time travel secrets with me, John Goodman.
The actors glow in the luminous gray scale at the beginning and, as George’s fortunes decline, the tones flatten to reflect his misfortune. The soundtrack, as well, is impeccably well suited to the 1920s era. But despite The Artist’s lack of color and sound (haters, I will not be taking you seriously) it is far from boring. Hazanavicius takes countless liberties in playing with modern angles and even playfully adding sound into dream sequences and the like that the screen is mesmerizing. They pay just enough homage to the classics of the past while taking advantage of modern technology that the film ends up being both nostalgic and innovative. A love song to a lost film genre, Michel Hazanavicius upcycles a film style long considered obsolete.

Oh my God, even the preview is amazing. Did you get that I liked this movie? No?