Okay, there are way too many Christmas movies to make just one list, so I'm going to break this up into chunks for all of y'all.

Now some of you may have seen that the majority of these movies take place in the 40's and 50's and be all "Gross. I don't watch movies that aren't in color." Well, my friend, let me kindly tell you that you are a fool. Because this era features some of my favorite Christmas movies ever. So without further ado, here's: 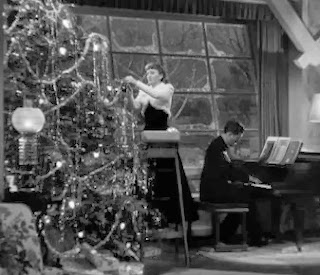 THE BEST CHRISTMAS MOVIES EVER MADE BEFORE 1960!!

Ironically, when this movie first came out in 1946 people were not crazy about it. It was right after the war and a lot of people found it to be too depressing. However, in the years following it developed a cult following and has been a Christmas classic ever since. The story follows George Bailey, a hometown guy that, despite always wanting to get the hell out of his hometown, is as much the center cog of it as anyone. When one rough Christmas Eve has him wishing he'd never been born, circumstances occur that make him reconsider. The movie's themes of hope and gratefulness really tune in with the season. And really, what would Christmas be without good ole Bedford Falls?

so the quality of the VistaVision is much better on the Netflix version...

Not the first movie to feature the actual song "White Christmas" by almighty crooner Bing Crosby, but probably the one that you remember better. The movie was actually created to be a sequel for the original film that featured the song "White Christmas," a flick called Holiday Inn (mentioned later on this list), but Fred Astaire had retired at that point so the movie was reworked at the last minute for Danny Kaye (my favorite guy). The story follows singing duo Wallace (Crosby) and Davis (Kaye) who meet up with new pals The Haynes Sisters (played by Vera-Ellen and Rosemary Clooney, George's aunt) and put on a show in a failing hotel in Vermont. With some mind-boggling dance numbers, sweet songs, and gorgeous color, this one's been in my family collection for years. The ending always makes me a little misty. Catch it on Netflix for free!

okay, this trailer is incredibly uncomfortable, but the movie is fantastic I promise!

Alright, this is one of my top three Christmas movies of all time. Elizabeth Lane (played hilariously by Barbara Stanwyck) is a famous food writer for national magazine American Housekeeping. A role model of an American woman, Elizabeth Lane's husband, baby, perfect recipes, and farm in Connecticut are coveted by all of America. Except there's one problem: the real Elizabeth Lane lives in a New York apartment by herself, baby-less, and is a terrible cook. When her boss (oblivious to the lie she's living) forces her to host a sailor on her farm for Christmas, she fortunately finds a way to keep up the facade. Only there's one more problem: she's falling for the sailor. As everyone begins to figure out that maybe Elizabeth Lane isn't quite the picture perfect woman they all imagined, there are nothing but laughs. A hilarious romp from 1945, I absolutely love this movie. Sets and costumes are fantastic and the comedic timing is impeccable.

You may have heard of the remake of this one, The Preacher's Wife, featuring Whitney Houston as a kid's-solo-stealing possible-husband-cheater-onner, but the original is so much sweeter. Also it has Cary Grant, and Cary Grant > Denzel Washington any day (sorry, it's true). A bishop is struggling to have a cathedral rebuilt but in his efforts begins to lose sight of his faith and of his family. Sent from heaven to help the bishop rediscover who he is and the value of his family, Dudley (played by Grant) befriends his wife (played by a very sweet Loretta Young). The story (although sometimes it makes me raise my eyebrows slightly...) is very cute and very "true meaning of Christmas." If you're looking for some old-timey religious inspiration, this movie's got you.

once again, an awkward trailer...
geez, really took people a while to understand this type of publicity...

Again, yes, this one has been remade, but the original's characters far outweigh the clunky dramatic (and, let's be honest, slightly bitchy) yuppies in the newer one. When the real Santa Claus comes to New York and gets involved in the annual Macy's parade, things seem too good to be true! And maybe they are. After Kris Kringle gets involved in a legal dispute over his true identity and possible delusional tendencies, a young lawyer defends him saying that he really is Santa Clause. Played with so much more sincerity than the remake, I'm obsessed with this one. It's much more lighthearted and sweet. And with a supplemental story line featuring a child (young Natalie Wood! so cute!) trying to figure out whether or not Santa Claus is real, this movie will have you dying from the adorable.

Six words: "I must stand on my head!" If you don't know what I'm talking about, you should probably see this version of the movie. Now, I know what you're thinking, "A Christmas Carol!? How original!" and I'm gonna tell you to shut up right now, because next to The Muppet Christmas Carol's Michael Caine, Allistair Sim is the best damn Scrooge I've ever seen. Total asshole in the beginning, sure, but his transformation into the giddy man at the ending is one of the most graceful in any Christmas Carol reincarnation ever.

A lesser known Christmas tale, but a great one nonetheless. When Sheridan Whiteside (Monty Woolly), a renowned critic, comes to visit a family home for dinner, he slips on the icy steps and hurts his leg, forcing him to stay with the family until travel is possible. Confined to a wheelchair, Whiteside begins meddling with the lives of the family he's staying with - even after his leg heals! But will he see the error of his ways once he notices the dwindling attitudes of the people he cares about most? Not specifically a Christmas story, but a holiday tale. Features big stars such as Bette Davis, Ann Sheridan, and Jimmy Durante. Very entertaining. (Was also done as a stage production with Nathan Lane not long ago, the recording of which I believe is on YouTube.)

Okay, maybe not 100% a Christmas film either, this movie chronicles the life of a St. Louis family at the turn of the 20th century through the four seasons. The emotional crux of this movie, however, happens during Christmas time. And nothing is more emotional than hearing Judy Garland's character sing "Have Yourself a Merry Little Christmas" to her little sister the day before they're supposed to be moving away to big scary New York. Expert tears by Margaret O'Brien. Once again, beautiful Technicolor. They don't make 'em like this anymore.

Connie (Janet Leigh) is struggling to find time for romance in her life after the death of her husband in the war. The only person she seems to have time for is her little boy, Timmy (a.k.a. the cutest kid I've ever seen). Working one day as a comparison shopper, Connie accidentally gets a salesman (Robert Mitchum -swoon-) fired. After their paths cross more than once, they begin to form a relationship that may be a little stronger than friendship - much to the chagrin of Connie's fiance! This movie is really carried by the chemistry between Leigh and Mitchum, who seem to have a sort of unspoken magnetism. Equally engaging is the little boy who plays Timmy. Holy crap is this kid cute. A great Christmas tale off the beaten track.


This version of A Christmas Carol is way dated, but in being so has a certain charm to it. Featuring laughable aging makeup (by today's standards) and extremely hyperactive Cratchet children (seriously, I swear, they never stop exclaiming at everything), this movie is still pretty entertaining. Also features the above scene in which (contrary to the book) Bob Cratchet goes nuts and buys everything under the sun after Scrooge fires him. I like it because it was the only version of the story that we had in our house for a while, and there's something to be said for the over-acted style of the 1930s. Definitely stands out for its sets and costumes.


Possibly the strangest and most uncomfortable Christmas movie to date, this movie boasts being the only film ever narrated by an Oscar (despite the fact that this has no relevance to the story whatsoever). When a young delinquent (played by a spunky Debbie Reynolds) is taken in by a struggling Hollywood writer, weird things happen. Being charitable since it's Christmas, he decides to keep her off the streets for a night. And soon after decides, for some reason that I forget, that he should marry her so that she can stop being a delinquent or something. But despite the fact that this is a strictly paper marriage on his side, Susan is determined to show him that she can be the perfect wife for him. Very uncomfortable, but kind of funny, I somehow end up watching this one every year on Christmas Eve. (I really can't tell you why.)

(okay, for some reason, I can't embed the link in this post because all of the videos have it disabled, so here's the link)

A musical and dancing vehicle for Crosby and Astaire, Holiday Inn was the first movie to feature the song "White Christmas." Jim (Crosby), jilted after his buddy Ted (Astaire) steals away yet another one of his fiancees (you'd think that he'd stop being friends with this guy...), decides to move to a farm wher life is "simpler." After figuring out that life on a farm is actually quite difficult, he decides to turn the farm into a hotel for every major holiday and earn a few bucks entertaining the locals with his best girl, Linda (played by Marjorie Mason). But when Ted gets wind of it, Jim is hard-pressed to find ways to keep them away from each other. This movie is actually pretty great for any holiday. (Except for Presidents' Day. Sweet Jesus, a more offensive and racist musical number there never was than "Abraham"...)