Okay. So. For those of you that hadn't read my review of the first film, The Hunger Games (here), I was unimpressed. It wasn't a bad movie, but it lacked a lot of the emotional integrity that the book had.

That being said, I was totally blown away by Catching Fire. In a rare event that only special sequels like Toy Story 2 and The Dark Knight get to enjoy, Catching Fire joins the ranks of sequels that are even better than their predecessors. And that ain't no easy feat. 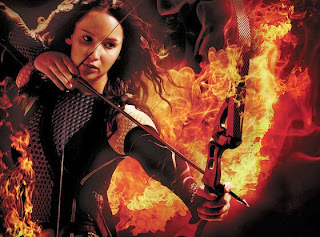 I mean, come on. Even the promo art is better.

This movie picks up where the first one left off. Katniss has been living back in District 12 and is about to go on a tour of the 12 Districts with Peeta as part of their victory. But things are not all as quiet as she would've hoped. Before they leave on their tour, Katniss is visited by President Snow, who tells her that she and Peeta must convince the public that the way they left the games was because of their love for each other - not an act of defiance. After she promises to comply, the tour begins. But things only get worse. Riots and botched speeches give way to more conflict and, before they know it, they're back in the games that so haunted their lives the first time. Only this time with a twist. Competing against other tributes that have already won previous years, this round becomes the ultimate survival game. 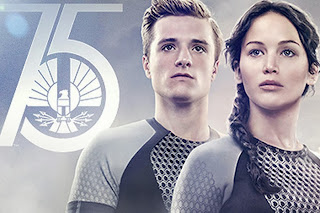 As a side note can we talk about how all of Panem's propaganda posters
look like they were made in North Korea? (Coincidence?)

So wow. I tell ya what, wow. I didn't have my hopes high for this one, but the new director choice really served them well. (Francis Lawrence. Also, I feel it necessary to mention that a member of the audience shouted "BLESS YOU, FRANCIS LAWRENCE." at the end of the film. Yeah, it's that good.) Instead of vom-inducing shaky-camera, we've got a clear agenda going on here. Who knows if it's the fact that there aren't as many young children being killed in this one, but the action scenes were much more straightforward and SUSPENSEFUL. Each shot was made with more attention and details didn't seem as sugar-coated as in the original. The action part really gets fulfilled where the first one seemed a little unsure of itself 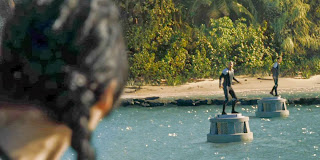 So much action!
(Couldn't find an action shot. Apologies.)

Another layer that seemed to form in this newest installment was the development of the characters. The ones I had considered largely miscast in the first one really seem to come into their own in this film. Jennifer Lawrence, who I thought played Katniss a little too cold in the first one, really becomes a full-bodied character in this one. Her experiences from the first games really seem to haunt her convincingly in this ones, as she finds it hard to emotionally separate herself from things that the state has told her to do. And Josh Hutcherson (bless his short little stature), goes from a lovesick puppy dog to a guy that you'd buy has legitimate feelings for this girl. While in Hunger Games he seemed full of big dopey stares and a questionable level of devotion, his experiences with Katniss in the first games make his love a little more believable and a lot more understanding. (God I love them together. Always was Team Peeta.) 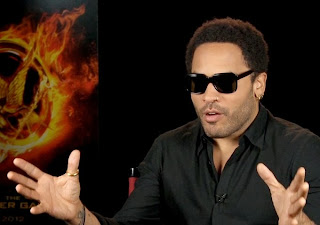 Sorry, Lenny, still not buying you as Cinna.
Get out of these movies, please.

Beyond all of the acting and cinematography, though, the story in this one is better pronounced as a film this time around. The first book isn't totally action-driven. There's a lot of internal monologue and confusion and waiting and sleeping in trees. But the second book, and this movie, are fueled by constant action and character interaction. Additionally, a lot of the smaller details that I skimmed over while I was busy devouring the second book are fully recognized visually in the movie so that they make more sense ("tick tock," ahem, ahem, and that whole set-up my fellow pre-readers).

The whole film, really is just so much more BADASS. While the first movie seems to take its time getting to know all of the various characters and special situations, it doesn't ever seem to dive right into the heart of the problem. But this one does. Blame it on the subject matter being of a "greater good" kind of depth as the series continues, but Catching Fire had me biting my nails waiting for the tension to subside. The whole idea of revolt really powers through and, even in the face of incredible diversity, the resilience of people in this is just really touching. Maybe that's the other thing that gives this movie more depth than its predecessor: the fact that friendships and bonds are made. And the fact that these bonds are interrupted by something as maniacal as their government only serves to fuel the fire of their revolution.


Also, I have to show you this: