Well, my children, after the insane-o crazy December work frenzy, I have finally found the time to chronicle and dissect my latest cinema visit, which was spent seeing The Hobbit. I was pretty excited to see this for a multitude of reasons:

A. I had been nerding out hardcore with my boyfriend/Tolkien guide, Sir Nicholas, and watching all of the Lord of the Rings films for most of early December (when I wasn't watching Muppet Christmas Carol anyway). With his help I went from understanding about 42% of what was going on to understanding an astounding 79%, making the films much more sensical and interesting. 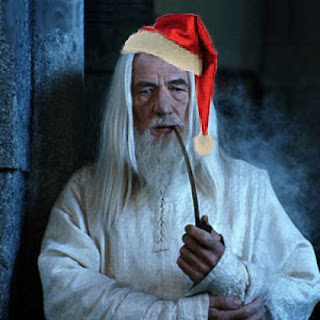 I mean it could be a holiday movie...

B. I love Martin Freeman. If you didn't notice him in either Love, Actually or Hitchhiker's Guide to the Galaxy, watch them again. Do it. 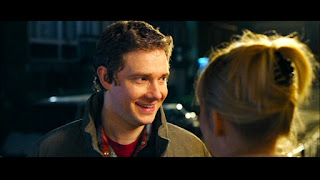 C. Peter Jackson is a beast. Like actually insane. 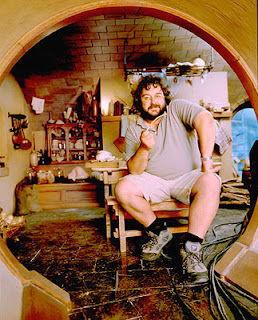 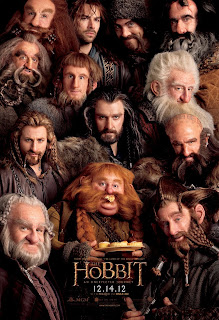 And their creative braids will surely affect
the latest fashion trends.

The movie starts out a few hours (or perhaps days) before the events that pass in the beginning of The Fellowship of the Ring. Thinking about leaving The Shire in the immediate future, he sets down to write about his first adventure with a group of dwarves and Gandalf the Gray.

We are given the back story of the dwarves existence in Middle Earth. They lived in a mountain and crafted beautiful works to be sold at a market that sat adjacent to the mountainside. But one day a dragon came and invaded their home, shacking up at the king's own treasure room (dragons have a thing for gold, if you're not familiar with your mythical creatures) and leaving the dwarves to live out their existence as nomads. This is where the quest comes in. 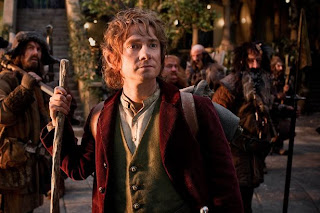 After years of trying to rough it living among men and in small groups, a small group of dwarves has decided, with the help of Gandalf, to storm the castle and try to take back what is their homeland. To help them, Gandalf enlists Bilbo as their "burglar" as he is tiny and light on his feet. Despite the skepticism of the dwarves, he joins them on their journey the following day. The events that follow include a few run-ins with orcs, a visit to the Elves's Rivendell village, an escapade with trolls, and a battle royale with an underground goblin village, where Bilbo gets the legendary ring. 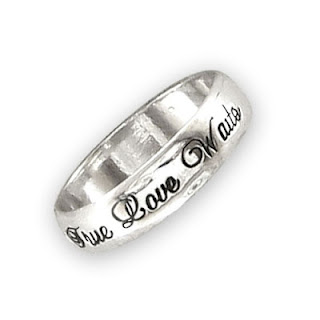 
So I had read the book The Hobbit when I was about 16 years old, I think, and could only remember about half of the plot, but it wasn't a horrible hinderance when it came to watching this film. In fact, Crazy Jackson decided to expound upon the original story of The Hobbit and give it some meat from Tolkien's Appendix so that it could be divvied up into not only one movie, but two (in this case, my normal annoyance with open endings and leeway for sequels shall stand aside, because I'm actually glad he's doing so much justice to the book and more). That being said, there's so much that happens in this film I'm glad he took the time to get to it all.

The cinematography is beautiful, and it's no question that Jackson has a veritable genius when it comes to bringing to life the wonders of this foreign Middle Earth. The perspective on all of the assorted creatures is impeccable, and the detail that goes into each of their faces, from the stout and large-nosed dwarves to the hideously creepy Gollum, is frighteningly realistic. I would definitely recommend seeing this film in the 3D version, especially the version with the more frames per minute because it's gorgeous. 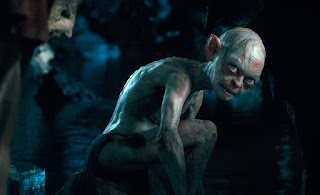 I don't know if it's the advanced technology or the
fact that he's in the dark, but he seems a lot creepier now...

A word of warning, though: I would hesitate to bring small children to this. Being more beefed up than the original book, the film has some more serious fodder to it than you might think, and hints often to the upcoming war and tragedy that we see in the Lord of the Rings movies. And though the dwarves are pretty funny, they are set against hideous and scary creatures like goblins, orks, trolls, and the (once again) frighteningly creepy Gollum. If you have a stoic kid, go for it, otherwise I would air on the side of caution.