Woah. And yes. And yes please. And awesome. And YES. Holy crap, Django is almost too awesome for words. Normally, I'm not a huge Tarantino fan, but it's impossible not to like this movie. While it's incredibly gritty (Tarantino, duh) the subject matter and the satisfaction of revenge in this movie are spot-on. How could anyone not like a movie in which a bad-ass ex-slave takes revenge on a ton of white people? YES. I haven't seen a movie that has been this adrenaline-filled since...I don't even know!

Django (Jamie Foxx) is a slave in transit to be sold when he is apprehended by a friendly German bounty hunter named Dr. Schultz (Christoph Waltz). Dr. Schultz originally takes him on to identify 3 bandits that he is after, but before long Django shows his own skills at bounty hunting and the two of them not only create the best bounty hunting duo in the South, but embark on an adventure to save Django's beautiful wife named, believe it or not, Broom Hilde (also referred to as Hildy). Searching the dirtiest of the Mississippi slave trade auction records, they find that she has been sold to a Mr. Candie (Leo DiCaprio) and now lives on his plantation, Candie Land. 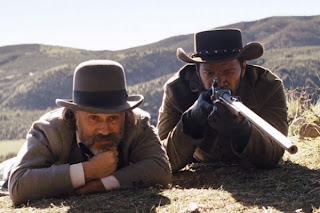 With extremely brutal scenes that hark back the horrors of slavery and callousness, Tarantino somehow manages to touch on this sensitive subject matter by incorporating the melodramatic style of the 1960's spaghetti western*. Don't get me wrong, though. The vibrant colors and excessive bloodshed from this genre don't exacerbate the content, but rather reinforce it. In trying to express this era of inhumanity, Tarantino seems to understand that there is no such thing as over-dramatizing. During a time when people were viewed as literal property, it isn't surprising to see one man eaten by dogs (though it's largely off-screen), people branded with an "r" for "runaway" right on the face, and men being ordered to fight each other to the death for mere sport. 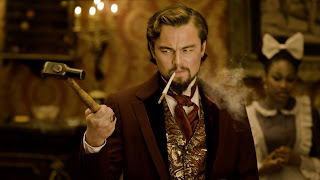 But because of this brutality, the comeuppance that each of these horrible white people receives is more than wholly satisfying. You feel the anger that Django feels as he's forced to watch all of these things happen, and as he experiences them personally as well. This makes the bloodbath all the more gratifying, as not more than one innocent person dies. Literally. 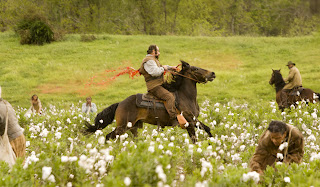 In classic Tarantino style, though, there is humor along with these horrifying images. In a particular scene, he somehow (incredibly) makes the KKK hilarious, none of them being able to see out of their newly-made hoods, as they try to unsuccessfully ambush Django and Dr. Shultz. Tarantino's timing is also impeccable. Despite the heavy, heavy content, there is always a line delivered by someone that creates a levity and a chuckle, making it easier to watch. 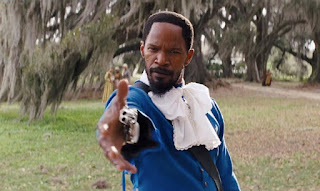 There's nothing funny about murder...
...unless it's in a costume like this...

Even the soundtrack is KICKASS. Blending old bluesy country like Johnny Cash with psychedelic songs and even big band soul tunes from the 70's, the music works in every single scene and keeps the plot from being a sob story. It also makes Django look like a certified BAMF.

Honestly, I didn't expect to love this movie because I thought it would be too intense for me (and honestly, some parts were difficult), but the payoff that you get at the end, and the delight I took in watching the playful cinematography in this, made watching the whole thing worthwhile. I sincerely hope that there were many freemen like Django in the Antebellum South.


*So you wanted to learn about spaghetti westerns! Good for you my little munchkin! Here is the definition as described by Wikipedia:

Spaghetti Western is a nickname for a broad sub-genre of Western films that emerged in the mid-1960s in the wake of Sergio Leone's film-making style and international box-office success. It was used by critics in USA and other countries because most of these Westerns were produced and directed by Italians. According to actor Aldo Sambrell, the phrase 'Spaghetti Western' was originally created by Italian journalist Alfonso Sancha[1] In the beginning the term was used in a derogatory sense, but over time it has become accepted as descriptive.

In addition to what the all-wise Wikipedia has said, I would also that spaghetti westerns are a little over-the-top. Most of them had an extremely dramatic love story, really graphic violence, and a lot of times had to be dubbed over in English. Movies like The Good, The Bad, and the Ugly and the original film Django are considered to be spaghetti westerns.
Posted by annie_J at 12:49 PM