MST3K: If You Don't Know What That Stands for, Please Leave.

Ok, guys. First thing's first. You may notice a blinking, colorful, not-white, clearly-an-ad box sitting at the bottom of this post. For that, I am heartily sorry. Except not really. Because I'm a college post-grad who needs more money. And you are brainwashed into not noticing these ads because you (like me) see them literally on every site imaginable. Therefore, sorry for selling out...but not really.

So this morning, I discovered that the MST3K movie was available and watched it. Now, before I go into the whole review of said movie, I would like to explain a little about what MST3K is:

As their theme song tells us, the first-Joel-then-Mike character has been shot into outer space by people that don't like him for reasons that are never really touched on (trust me, they're not important). These evil villains have decided to torture Joel/Mike by sending him cheesy movies, the worst they can find (lalala). 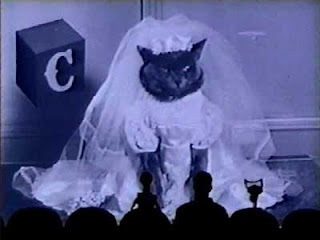 So the show ensues with the awful movie (sometimes headlined with a 1950's health class-esque newsreel) being bashed by Joel/Mike and his co-bashing robot friends, Tom Servo and Crow. The plot of the actual show does come up between commercial breaks but is really just a cursory way of bringing in a reason for these guys to be doing what they're doing. Most episodes of the show are under an hour and a half and, really, they're SO funny.

So the movie version was (somewhat disappointingly?) almost exactly like the episodes of the show. The movie that they chose for it was called This Island Earth and it revolved around the horrible plot of some butt-headed aliens trying to gather scientists in Georgia, then taking them to their planet, and then dropping them off back here again. Bad effects, horrible acting, and hilarious commentary by Mike, Servo, and Crow. It wasn't the worst MST3K that I've seen but it definitely wasn't the best. A little shorter than I would've expected a movie version to be. And not as filled with inside jokes as I would've liked. Still, a cinematic version of a great show.

For the curious, though, I wouldn't recommend seeing the movie version first. I would ease your way up after watching a few select episodes of the original show. That is including, but not limited to: Santa Clause vs. The Martians, Night of the Blood Beast (especially good), Devil Fish, Red Zone Cuba, Prince of Space, The Mole People, Zombie Nightmare (also noteworthy), Soultaker, Final Justice, and Werewolf.

Some of my favorite episodes of the show are:

In this hilariously dated tale, young Jimmy Wilson is put on trial for murder or something. His main defense: I accuse my parents! Apparently, his parents sucked so bad that they put Jimmy on the fast track to being a moron. Jimmy lies to all of his friends about how great his parents are, gets embarrassed by his drunk mom, and then takes off on his own to work in a shoe store where he meets a "sexy" nightclub singer. Hahaha, oh man..Really, there's just too much material to work with here.

Well, aren't you in luck, this is the full episode. (Also, I couldn't find a "best of" so deal with it.)

So this is the only one of the Gamera series that I've seen, but apparently they're all pretty funny. Centered around a Godzilla knockoff named Gamera, this giant turtle terrorizes (and then apparently helps?) the good people of Japan. This one features two idiot children hijacking a spaceship and messing a whole bunch of stuff up. Also, it's really quite horribly dubbed, making it all the more easy to make fun of. Check it out!

2. Manos: The Hands of Fate

The crown jewel of all awful movies, this horrible flick centers around (here we go) a small family who stumbles upon some kind of weird religious cult thing, guarded by a weird dude named Torgo. There's also a bunch of ladies wearing granny panties under see-through white dresses, a hell beast that's really just a poorly trained doberman, and a goofy man named Manos who wears a silly cape with big hands on it (really, one of the only references to hands of fate). Torgo makes up about half of this bizarre, half-assed movie, but watch for the over-choreographed chick fight towards the end. Pretty funny stuff.

Holy. Crap. Never have I laughed as hard as I have laughed while watching this movie. Seriously. I think I've watched it upwards of seven times with more than ten people. The movie's plot follows Troy McGregor as he tried to search for his father's killers. Quickly getting involved with an ancient cult, he teams up with Zap Rowsdower (That is his actual name.) and tries to search for the answers to his father's death. Oh my god. If there is one way to sum up the hilarity that this movie brings to its viewers, it can be summed up in the word "Rowsdower". Totally destroying the characters of the nerd-tacular Troy McGregor and the too-Canadian Rowsdower, there really is no moment in this movie to catch your breath. Just trust me on this one and see it for yourself.