Descendant (No. Not Plural.)

Bet you thought you were about to read of a review of The Descendants. Well guess what, dumb dumb? I already wrote that one. This movie is something completely different. And lacks an "s" at the end of it.

After hearing nothing from Swapadvd.com for about three months, I got accosted by an email from somebody asking for my copy of what is apparently called Horror Cinema V1. Basically during Halloween season I get fed up with not seeing horror movies on cable and decided to go to Walmart and buy a collection of 8 movies on two discs for a whopping five dollars. Obviously all of them are Oscar-worthy.

So seeing that I only had a limited amount of time to watch all of these cinematic gems, I decided to settle for the worst-looking one and call it a day.


First of all, let me start by saying the thumbnail-sized poster on the cover of the DVD case had what looked like a photoshopped red-carpet picture of Katherine Heigl with some creepy shadow man behind her. 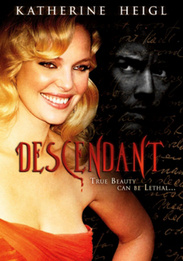 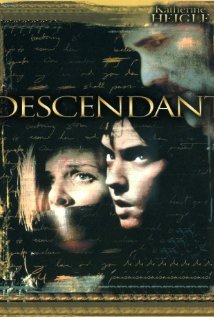 So much more terrifying, I know.

The movie starts off with an incredibly disorienting bang (not unlike a Lifetime movie). First off, it's the 1800's and a certain Frederick Usher has just killed Edgar Allen Poe's sweetheart (I think?), Emily Hedgerow, and tosses her still (somehow) beating heart at his feet. Then there's some yelling about how Poe profited from Usher's unfortunate incestuous family situation or something and Poe looks really upset.

Aaaand then we cut right to Ethan Poe (Ethan? So 2003.) smoking weed and getting a lap dance from a call girl with an incredibly awful wig and probably the most boring stripper underwear known to man.

And THEN we cut to Ann Hedgerow (played by the lovely Katherine Heigl) visiting her mother's grave and getting a pep talk from a policeman who we learn is in love with her but who she sees as a big brother type. Typical. 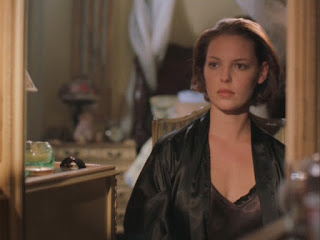 After that the plot evens out a little better, kind of. As it turns out, Ethan Poe's last name is actually not Poe, but Usher, and it seems that he has inherited his DESCENDANT's thirst for blood (see what I did there?). Unfortunately, though, Ann has taken a liking to him and doesn't start to see the signs of his blatant craziness until it's almost too late. The story then goes into how Usher has to marry someone from the Hedgerow family and somehow sell a bestseller or something? Why? We don't know. They don't really go into what the consequences are for failing. Go figure. There are also quite a few half-assed attempts to reference Edgar Allen Poe's works without really ever talking about the man himself at all.

There are so many funny things going on in this weird movie. For one thing, wardrobe must not have been on their A-game for the entire production. All of Ann Hedgerow's shoes are hideous, and for almost the entire movie she's only wearing black and white peasant tops. Also, Edgar Allen Poe's makeup is a joke. They literally drew him forehead lines to make him look older, but it looks like they did it with gray eyeliner a la high school musical. 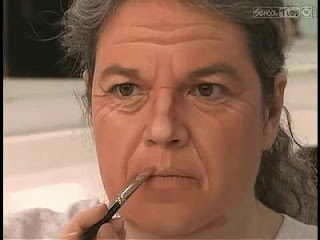 Actually, this lady's looks way better than his did, even.

Also, they seem to kind of forget film technique. They never show Ethan committing the murders, but always show him in shadow form, even though we all know from the beginning that there isn't going to be any kind of red herring. Why not make the killer more of a presence instead of making him a shadow for half the movie?

Anyway, this movie was pretty good, campy fun. I would watch it while doing a crossword puzzle, like I did though.

Also look for William Katt as the doctor!