The Secret World of Arriety (aka The Borrowers in Cartoon Form)

Headed home two days ago to see my youngest brother starring in How to Succeed in Business Without Really Trying (mouthful) at the Middle Township High School on Thursday (great job, Bill!) and got the chance to hang out with the fam yesterday afternoon. Cape May County really does not have that much goin on in the off-season, being completely devoid of tourists and leaving the locals with few options. 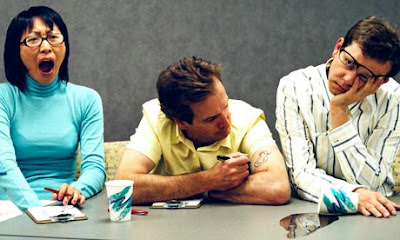 So should we go bowling or...uh...go bowling?
But being the crazy cinephiles that we are, we decided to go see one of the newest movies produced by Hayao Miyzaki, The Secret World of Arrietty, which is an anime version of the kid classic novel The Borrowers by Mary Norton.

Now, ok haters. At this point you're probably like "Anime is gross, I hated Pokemon" but I assure you, that is not what is in store for you. If you've seen Studio Ghibli's other movies (Howl's Moving Castle, Ponyo, or My Neighbor Totoro to name a few) you know that you're always in for a gorgeous (GORGEOUS) movie. 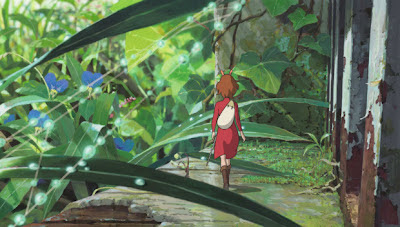 My brain just blew up.
So The Secret World of Arrietty is based on a book about small people leaving in a country home and "borrowing" everything that they need to survive. But their lives are disrupted with the addition of a boy named Shawn (voiced in the US version by David Henrie) to the house that they live under. The very first day that he arrives at the house, he glimpses Arrietty hiding in a bush. Arrietty disregards the possible sighting and go home to prepare for her first "borrowing". But things take a turn when she's spotted once more while trying to take a sheet of kleenex from Shawn's room. Things escalate even further when the housekeeper (voiced by Carol Burnett) discovers evidence of the tiny people herself.

This movie was adorable. I mean, kid's movies have to be versatile, appealing to both the children's attention spans and the parents that take them to the theater. But this was such a sweet and beautifully crafted film that even though there's not a whole lot of action, it dazzles you immediately. 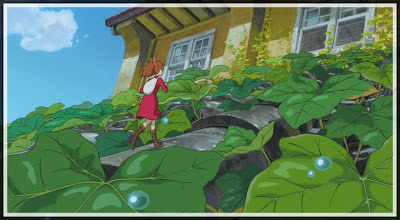 Bootiful.
Studio Ghibli (which is also the studio that produced Princess Mononoke, My Neighbor Totoro, Howl's Moving Castle, and all the other Miyazaki movies I talked about five seconds ago) always does a fantastic job of vividly capturing what real life is like and enhancing it through cartoon form the same way a painting does. Arrietty is no exception. The colors, sounds, and movements are so realistic that the movie turns into a work of art. Hiromasa Yonebayashi, the film's director, really triumphs in his vision of what the borrowers' world looks like. You can tell that he is no mere film-maker, he is a craftsman. The noises of the cicadas in the summer time, how a water drop would form coming out of a quarter inch size tea kettle, what light looks like coming through trees, he's thought of it all. 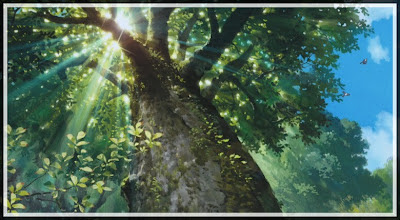 !?!?!??!?!?!?!?!!??!
Plot-wise, the film was a little slow. There could've been a little more action. You're never really wondering whether the borrowers will be killed by the "beans" (human beings, duh) so there's not a whole lot of suspense. Additionally, the characters are so calm throughout the entire movie (except for Arrietty and her mother, voiced by Amy Poehler. Hilarious.) that I sometimes found myself focusing more on the various makeshift object around their house instead of the dialogue. 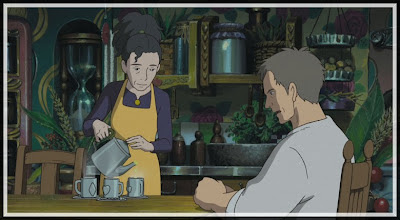 Hehe, bottle caps are too small to store things for regular sized people...
A really good family film and a really great artisan film for those of you who (like me) are starved for beautiful cartoons in the current 3D animation nonsense trend that seems to be taking everyone by storm. It also far surpasses The Borrowers of 1997. 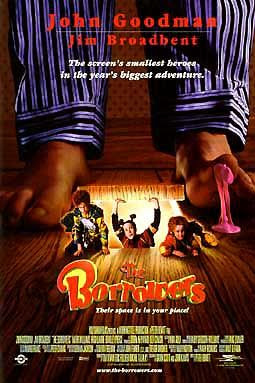 PS Try clicking on the pictures in this post to get the full effect, they turned out a little smaller than I liked after I posted them!