Sooo this weekend, instead of joining the masses and flocking to the nearest theater to see The Hunger Games, Bill came up to visit and we decided to opt, instead, for 21 Jump Street.

Now, I had been told by my mom that this movie had been pretty hilarious, but I had my doubts. I mean honestly, if moms are seeing it how good could it really be? But I must have seriously underestimated how cool Cath is because me and Bill were doubled over in the theater cracking up. 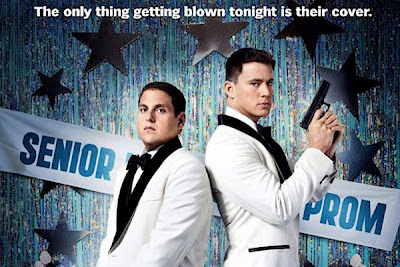 But high school movies never come to a crux at the prom!?
The movie is, of course, based off of the old 80's TV series of the same name, formerly starring Johnny Depp and that other guy that was in A Night At the Roxbury (I wanna say Greico?). But it isn't the same characters, reinvented as so many other shows have tried to do (Starsky and Hutch, The Dukes of Hazard, The Beverly Hillbillies, The Addams Family, aaand I'm gonna stop there cuz this could go on for a while). This movie features Schmidt and Jenko (Joanh Hill and Channing Tatum) as a couple of awful cops that get downgraded to being sent back to high school undercover to take down a synthetic drug ring.

I mean, that's really the entire plot. It also involves the two characters getting into a fight and then reconciling but I feel like that's kind of a given.

The real humor in this movie comes from their portrayal of how different high schools are now as opposed to around 2005. It was kind of funny to see how they portray 2005 too, haha. Velour jumpsuits, bleached hair, and letterman jackets. 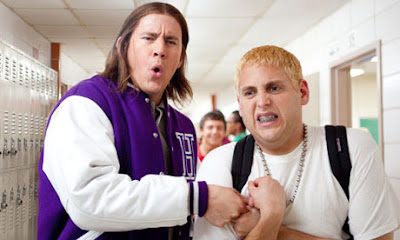 Ah, memories
And when the two cops go back to school all of the stereotypes that they had while they themselves had been in high school have now been completely morphed. They are now dealing with a hipster kind of crowd being the center of the popular ring, which means that bullying, fossil fuels, and littering are way not cool man. 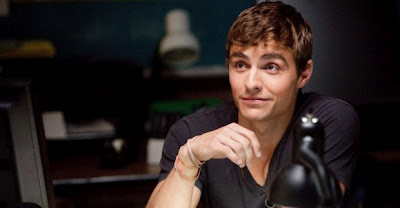 He rules a drug ring and still has time to work on the school yearbook
As a result, instead of Jenko (obviously a cool kid back in the day) taking over as the new king of the school, they flip the stereotypes on their heads and make Schmidt the new popular kid. Even though Schmidt was a total nerd in high school, these qualities of his have now become cool. So I guess a huge portion of the plot is also having both boys reconcile their past high school experiences with the ones that they have to go through as undercover cops. Schmidt lets popularity go to his head while Jenko gets humbled after becoming BFFs with the chemistry nerds.

SO. MANY. FUNNY. SCENES.

I don't know whether it's just the fact that they are so full-heartedly making fun of hipsters, that I'm old and I understand where Schmidt and Jenko are coming from, or that the writing is just really on mark, but this movie was hilarious. It was like a cross between Never Been Kissed and The Other Guys. Sweet teen comedy but also raunchy and outrageous. Just real enough to make a point but goofy enough that it's something new. 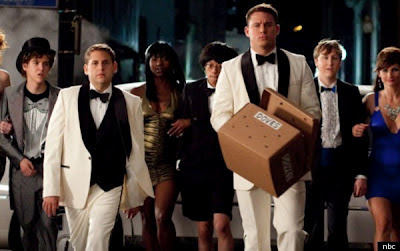 "Doves"
Seriously, I would see it again. Don't get peer pressured into seeing just The Hunger Games, cuz this one was pretty sweet too.

Also keep an eye out for cameos from some of your favorite TV actors!