Little Voice: If Ya Like 50s Music and Getting Caught in the Rain

Alas, my friends. I have not seen The Hunger Games yet. Mostly because I've been working my butt off covering my coworker's shift for the past nine days and couldn't convince myself that I could get through nine hours of work on the five hours of sleep I would've gotten after seeing the midnight showing of the movie (which totally sucked, cuz midnight releases are the best). But the review will be written the minute that I get home, so just hold your horses.

Nope, had to resort back to my good ole buddy, Netflix, who saw me through this difficult time and offered me the same movies it's been recommending me for about a year (I'll watch them when I'm ready, damnit!). Fortunately for Netlfix, my friend Josh (I do have friends that are girls, by the way, they just never recommend me movies. I'll bring them up someday.) told me to watch one that they've been recommending to me literally for a year, if not longer. The name of the movie was Little Voice and, to tell you the truth, I never watched it because I didn't know anything at all about it. It ended up being a really cool movie, though, both in terms of plot and in terms of its entertainment value. 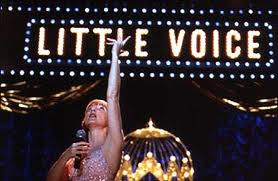 I already said what the name of the movie was, you don't have to point at it...
The plot follows a girl named LV (short for Little Voice. Just clarifying.) and her tyrannical mother, Mari (Brenda Blethyn). LV (Jane Horrocks) and her mother live in a quaint little British town where nothing ever really seems to happen, until Mari starts seeing a washed up talent agent named Ray Say (Michael Caine). After a night of laughs ends with the two of them trying to kick LV out of the living room, they accidentally end up discovering that LV maybe has a bigger voice than they had ever imagined. Ray then takes matters into his own hands trying to make LV into the star he's always dreamed of, with Mari only too happy to comply, but when each of them underestimates the fragility of her character, all hell breaks loose. 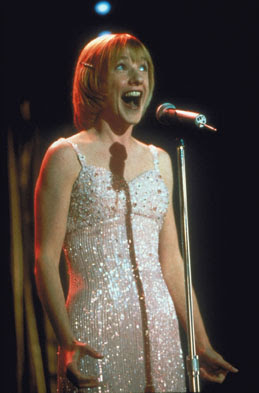 She's probably not singing but screaming. Probably.
The movie is interesting in that it is a lot of fun but also a really intense commentary on human relationships. LV is obsessed with the records of her dead father, who she was extremely close to. It is because of the amount of times that she has listened to his records that she can mimic the tones and mannerisms of all of his favorite stars. LV seems to also stand out in the plot as a comment on nostalgia and the dangers of letting it consume you. 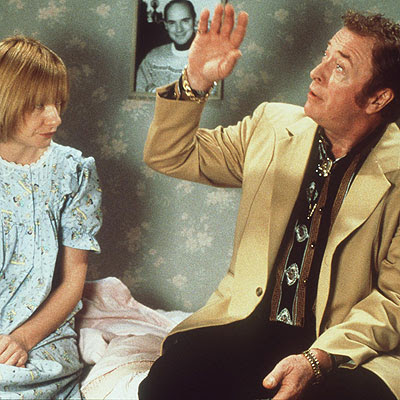 LV, Ray, aaaand LV's dead dad at center.
Completely opposite of LV is her loud and obnoxious mother, a character that at first you hate, but then almost grow to feel sorry for. While she is totally oversexed and loudmouthed, there seems to be a deep rooted loneliness about her that almost makes you empathetic to her when she watches as her daughter takes over the attentions of Ray Say. 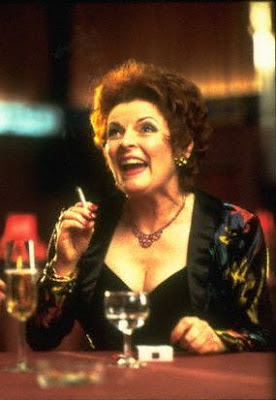 Love me!?
The movie's plot is also really simple but in a different way. Typical good versus evil story but with an unusual character that keeps the plot realistic and show tunes which give it an edge of surreality.

Ewan MeGregor also has a small part as LV's boyish love interest, which keeps the two of them almost childlike in the intensely corrupt atmosphere that surrounds them.

Interesting contrasts and a great soundtrack (seriously, if you only watch one scene, watch the scene of LV totally killin' all of her dad's favorite records. Or else the one where she flips out at her mom. Both great scenes).

Couldn't find a trailer, so here's a clip for y'all.