Has anyone reading this (if anyone is reading this) ever seen The Room? I never have, but from what I've heard it is the most bizarre movie that has ever been made. Directed, written, and produced by the same whacko, the movie was a huge flop. Caught somewhere between camp, melodrama, and just plain awful, the movie has become a cult hit among a random public of fans (no doubt hipsters, but I'll try not to discriminate...). Check out a clip from it here: http://www.youtube.com/watch?v=mQ4KzClb1C4

ThanksKilling is the The Room of any holiday film I have ever seen.

Really weird. I mean like…really weird. Set during the Thanksgiving break of a group of teenagers (I would like to see, for once, a horror movie starring the elderly. But anyway...), the film is about five teenagers being stalked by a homicidal turkey.

Yes. That is the actual plot. 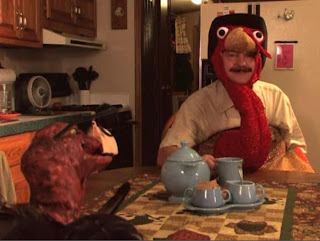 Legend has it that an evil Native American medicine man got pissed off at the pilgrims and "necromanced" [sic] a turkey to kill all the white people that he wants. But why has no one ever heard of this demonic turkey? Oh, it only comes out every 503 years. Of course. But how do they figure out how to destroy this half-dead zombie mutant turkey!? One of the characters suddenly remembers that her father keeps a lot of books in his garage, and--lo and behold!--there they find the 300 year-old book on how to kill the ThanksKilling turkey.

So, how to explain this film...When it began I was expecting the regular campy B movie trying to be halfway scary but making fun of itself. Y'know, something in the line of Bride of Chucky or something similarly weird. What I got was (I sincerely hope this was their intention) a movie that basically was just making fun of itself. While most other campy B horror movies have some semblance of actually trying to be scary (at least in my experience), ThanksKilling had absolutely no scary moments and is probably only in the horror-ish category because of its gruesome death scenes. In fact, almost everything about this movie was bizarre. The acting was awful. Like, actually awful, not intentionally awful. The love interests make no sense and, not to be a stickler, but the lead actress had some truly horrible zits on her face and no attempts seem to have been made by the lighting crew to make that even a little less obvious. Honestly, the only reason why I stuck this movie out was because of the weirdly hilarious turkey. In fact, not unlike America's favorite demonic doll, Chucky, this turkey had a really gruff and profane voice that was oddly humorous, and spewed out quite a number of stupid one-liners.