This lesser-known John Hughes film is a pretty alright time. The plot revolves around Dutch (Ed O'Neill) going down South to pick up his girlfriend's son, Doyle, in hopes of striking up a bond with him on the road trip back home. However, Doyle (Ethan Embry) ends up being an absolute horror. Brought up obsessed by his father's world of high living and snobbery, he shuns everyone around him and detests Dutch. However, despite their differences they come together as the road's increasing hardships get them down. 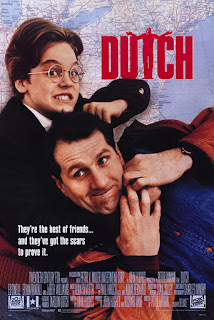 I've got to admit, it's no wonder that the film isn't very well-known for a John Hughes movie. Similar to cringe-fests like Meet the Parents, this movie kind of leaves you tense. The two main characters absolutely foil each other. The kid is totally detestable as a friendless Scrooge-type who seems to prefer his dad's way of living (God knows why, he's raised by his mom) and has no tolerance for the working class. Dutch happens to be a bizarre cross between a kid and a no-nonsense adult. Their interactions swing dangerously between uncomfortable and borderline child/adult abuse. Unlike the funny torture scenes of Home Alone, this film seems to get real-life dangerous in a lot of ways including fireworks gone awry, an almost car accident, and bebe guns being shot at kids. Even when they do reconcile their differences at the end (SPOILER ALERT: Just kidding, it's a John Hughes movie, you know it's gonna end happily) you kind of think "WELL IT'S ABOUT TIME!"

The movie also seems to have its own agenda in the name of Thanksgiving. In fact, Dutch and Doyle get into more than one socio-economic comparison/debate. The movie is very obviously trying to cast a favorable eye on the lower middle class, which is awesome considering the themes of Thanksgiving, and really they do it pretty well thematically as well. While they don't want to make a blanket statement about the lower class (check out the scene when they get a ride from some sympathetic prostitutes), there are quite a few statements about the value of money against the value of family and friends. Dutch, it turns out, is pretty wealthy, but has no problem spending the night in a homeless shelter with Doyle. Not bad messages for a season where you're supposed to be thinking of those less fortunate. 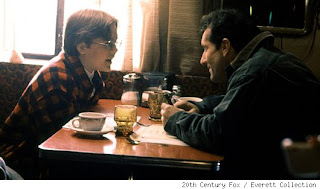 It's not a bad film but I would've liked to have seen what John Hughes himself would've done with it (Hughes didn't direct it, but only wrote and produced it). The acting is alright, the kid is detestable and albeit that Ed O'Neill seems a bit too Married With Children he isn't bad either (although I wouldn't have minded Robin Williams or someone a bit more whacky to give the role a try). While the film is more of a road movie than anything else, it brings the principles of Thanksgiving through in the end (i.e. love, gratefulness, compassion, etc.). Not a bad alternative to less memorable Christmas movies.
Posted by annie_J at 5:00 PM