So over here in California for the past week. Been couch surfing at my cousin's for the past couple of days and I've got tons of time to write new posts since she's at work til the afternoon. I know, I know, you're all waiting with bated breath. Well fear not, cuz I've got a new review for you. Unfortunately, I'm gonna have to break my Thanksgiving movie marathon for this one just in the name of staying current.

Last night we went and saw Anonymous, a film which I'd seen previews for but hadn't really had my eye out for in movie listings. I always feel a little dumb when it comes to movies that take place during Elizabeth I's time, and this one was no different. The English names are a bit repetitive, and after a while you had to remind yourself of which Cecil was which and who they were talking about when they referred to "William" (William Cecil? William Shakespeare? Will.I.Am?). After a while, though, you more or less understood what was going on.

So the movie begins almost exactly like Kenneth Branagh's Henry V, even to the point of having the same prologue (Derek Jacobi). The prologue introduces the subject matter in an anonymous playhouse and then the backdrop melts away to a realistic setting. The main theory surrounding the film is that William Shakespeare was not the actual author of his works. His close friend, Ben Jonson (Sebastian Armesto), is approached by the Earl of Oxford (played by Rhys Ifans pretty elegantly, and also known as Edward. Write that down.) to put on a play. Since Court doesn't approve of gentlemen writing plays or poetry, the Earl gives a number of plays to Jonson. When Jonson puts on the plays, the playwright is simply kept anonymous. One night the shows are such a big success that the audience begs for the playwright to show himself. So who volunteers? Illiterate actor and unpleasant fellow William Shakespeare.

But for the most part the film does not revolve around William Shakespeare (Rafe Spall), which is a good thing because he's really severely unlikeable. It revolves more around the life of Edward (Earl of Oxford, remember?). Having had a lifelong interest in writing and poetry, he decides to start sharing his plays anonymously in order to build English morale on the backdrop of Elizabeth's succession. 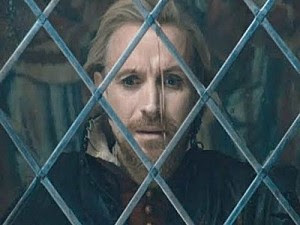 The plays are interspersed with big chunks of Edward's past as well. Young Edward (Jamie Campbell Bower) is shown marrying the daughter of William Cecil (David Thewlis) to keep a murder quiet, having an affair with the queen and impregnating her, and finding out his son is the Earl of Southampton.

When we get back to his future he is plotting with Essex to (re)win the queen's favor in order for him to get a leg-up in the succession and in Court.

So holy moly. Lot of stuff going on here. Not that conspiracy theories are ever simple, but it's even more confusing in an Elizabethan setting.

I've got to say, the movie dragged on quite a bit. They seem to get so wrapped up in the hypothetical politics more than the actual plays, which is a shame because I feel like their main audience was probably Shakespeare scholars. Also both my cousin and I were surprised with how overdramatic the acting seemed to be. I don't know about you guys, but Queen Elizabeth I in my mind has always been a pretty stoic, no-nonsense kind of queen (think Shakespeare in Love). Now I'm no history buff, but the Elizabeth we got in this film was like something out of a soap opera. She screams, she dances, she has sex, she's a wild card. And it's kind of uncomfortable to see her that way.

Another thing that was totally distracting, and I don't mean to hyperbolize, but almost every character in the film had a bizarre voice. Jamie Campbell Bower as a young poet? The creepy guy from Sweeney Todd that sings "I feeeeeel youuu, Joaaannnnnnaaaa"? I don't think so. Also I'm not alone in thinking that Ben Jonson kind of sounded like Hagrid and that Robert Cecil very closely resembled Gollum from The Lord of the Rings trilogy.

Perhaps if the film had been a little less lengthy, one could better focus on the positive originality of it all. After all, the audience ends up sympathizing with Ben Jonson way more than they do the greedy Shakespeare, and really Edward is very beautifully played by Ifans. But there is so much plot clutter that at times they reach a little too far.

For example, I don't care how good of a poet you are, you can't think up verse in the middle of foreplay.

3 outa 5 for some cool settings and such but bit of a letdown in terms of story.