Guardians of the Galaxy: Why the Hype is Right

Everyone else hear a trillion good things about Guardians of the Galaxy? Good. Because the rumors are true, friends. This is a gem of a film.

The plot revolves around Peter Quill, a man with a history as an outlaw and thief, who makes a living selling the things he steals. After having stolen a mysterious orb from a deserted planet, however, Quill finds himself a bit more wanted than usual. After being attacked from all sides by different (alien) people, he learns that this orb is perhaps a little more precious than he had originally supposed. We come to find out that the orb holds a precious, and extremely powerful stone, that can give the owner of it power enough to destroy the entire galaxy. Working against these miscreants, however, is a radical overlord named Ronan. Pissed off at a peace treaty that has criminalized fighting between his race and their ancient foes, Ronan has it in his head to pick up the orb and use it as he pleases. Determined to keep the universe intact, and being the only ones who know of his plan, Quill bands together with Ronan's ex-lackey Gamora, two bounty hunters named Groot and Rocket, and an ex-con named Drax, to form...(wait for it)....The Guardians of the Galaxy. The freakin' amazing thing about this movie is how simple it is. I know this sounds incredibly reductive (especially considering how analytical I know I can get sometimes), but the great thing about Guardians is how much it doesn't explain. Need to know more about the alien races? No ya don't! Want to know more about the feud between Ronan and his foes? Nope! Want to know how the orb came to be? Shut up! Extraneous details that so many other sci-fi movies lately have been getting caught up in become cursory because--you guessed it!--they aren't freakin' important!! This gives Guardians the feel of being a sort of grown-up kid's movie. (I should know, I watch a lot of them. No shame.) And you know if this guy's headlining, it's not going to be
anywhere near serious.

Additionally, whereas most of Marvel's fodder is pretty action-packed and adrenaline-pumped, Guardians gives us a chance to laugh at our main characters. Even though they're all pretty deadly by themselves (I mean, at one point they ALL are in jail), the misperceptions between their cultures create a hilarious backdrop to a typical save-the-world story structure. For example, Drax (played by Dave Bautista and my personal favorite character besides the obviously adorable Chris Pratt) comes from a planet where metaphors don't exist, creating extreme confusion between he and essentially every other character every five minutes. 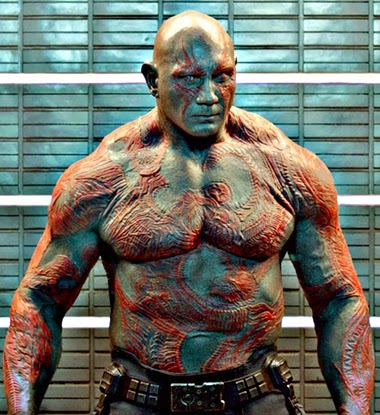 "Nothing goes over my head...my reflexes are too quick."

Adding to the fun of the film, and going outside the usual parameters of movies like these, is the awesome soundtrack. Peter Quill's link to an Earth that we instantly recognize, the music is exclusively 70s pop hits that are delightfully out of place in the galactic, futuristic setting. I dare you to get "Hooked on a Feeling" by Blue Suede and "Cherry Bomb" by The Runaways out of your head. (Seriously, I had to download the soundtrack, it's gotten that bad.)

All in all, an extremely refreshing film from the overcrowded superhero genre. Nice to see a blockbuster worthy of the name.