Dune: A Great Sci-Fi Flick (If You Can Understand What They're Talking About)

Woohoo! And happy to be a part of Forgotten Films's 1984 Blogathon! For my own 1984 review, I chose the movie Dune. 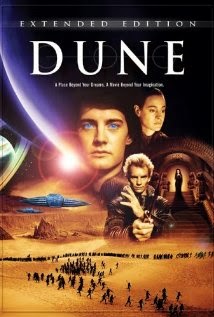 Now, Dune gets a bit of a bad rap. Unfortunately shadowed by a bunch of other fantastic blockbusters at the time (as per the whole reason for this blogathon haha), and hindered by director David Lynch's own qualms about it, Dune ended up being a bit of a box office bomb. It should also be noted that a lot of the terminology might be a little hard to get a handle on. But honestly, for a sci-fi flick of the early 1980s, it's not bad.

The story is set in the year 10,191 and at this point in time, people across the galaxy are using a spice called melange that is essential to traveling through time and space. It is only mined in one place, the desert planet Arrakis, aka "Dune." We learn right off the bat that the emperor (of the galaxy? of the humans?) sensing a threat to spice production, decides to send the Duke Atreides to Dune where he will be ambushed by Atreides's long-time enemies the Harkonnens. The emperor is also ordered to kill Duke Atreide's son, Paul, but for reasons undisclosed. 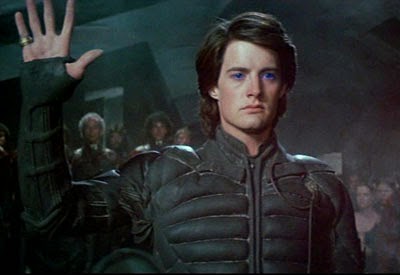 Paul escapes the planned ambush, which otherwise kills the majority of the Atreides people, with his mother. They find refuge with the Fremen, the indigenous people of Dune, and little by little learn more about what the spice is, how to fight back against the Harkonnens, who Paul really is, and why he is such a threat to the rest of the galaxy.

So, yeah, lots and lots of tricky terms in this movie. Apparently when the movie first came out they had to give out cheat sheets that gave a list of terms for the audience members unfamiliar with it. I confess that I had to watch it with the subtitles on because of the number of words that are completely alien (ha).

But once you get past the jargon of the film, it's actually pretty cool. Main character Paul (played by David Lynch's boy crush, Kyle MacLachlan) is an intriguing one, and likeable right away. You can tell that he's smart, and the fact that the emperor of the galaxy wants to destroy him makes you wonder why he's so dangerous. As things begin to happen on the planet Dune, Paul really gets a handle on being a badass. Knowing things that he perhaps shouldn't know and having visions about things that are going to happen, he starts to teach the Fremen how to use sound as a weapon, gathering information about sandworms (the only things that live on Dune besides the Fremen), and learning how to lead a resistance against the nasty Harkonnens.

The whole aesthetic of the movie, also, is fascinating. While I now have Jodorowsky's Dune on my Netflix queue, it's always nice to see how sci-fi movies lay out their worlds. Dune has its own feel separate from the likes of Star Wars or Star Trek. The lush costumes of the beginning almost makes it feel like a medeival movie at times, with harsh, angular sets bringing it back to a modern scope. And the rock opera-esque soundtrack kind of echoes that feel. Sweeping orchestral themes intercut with electric guitar at times. Nice dichotomy, and different for this type of movie.

The only thing that tripped me up about this movie (besides the jargon) was that it felt rushed. Dune, the novel, by Frank Herbert weighs in at about 900 pgs, and in today's timeline of stretching 200-page novels into 3-film franchises (ahem, The Hobbit), that's simply not enough time. The film therefore relies heavily on characters' inner monologue to get quick points across where they would've otherwise injected information into a dialogue. Additionally, things that the audience finds so foreign should get a bit more of an explanation sometimes. And while the introduction of the first five minutes helps to move the film along and get us acquainted with the planets, you can't really zone out at any point in this film, because you'll miss something important.

Kind of wish one of these had been in the DVD jacket...

Additionally, while I was surprised to find myself liking Paul Atreides (nothing against Kyle MacLachlan, but I wouldn't peg him for an action hero), I felt the acting overall in this film was a little stiff. Maybe because there is a LOT going on (and because this IS David Lynch) the acting falls to the wayside in favor of bigger-picture plot points, but in contrast to the huge possibility that Paul Atreides is this big messiah, everyone seems a little too accepting too fast, and a little too...glib. 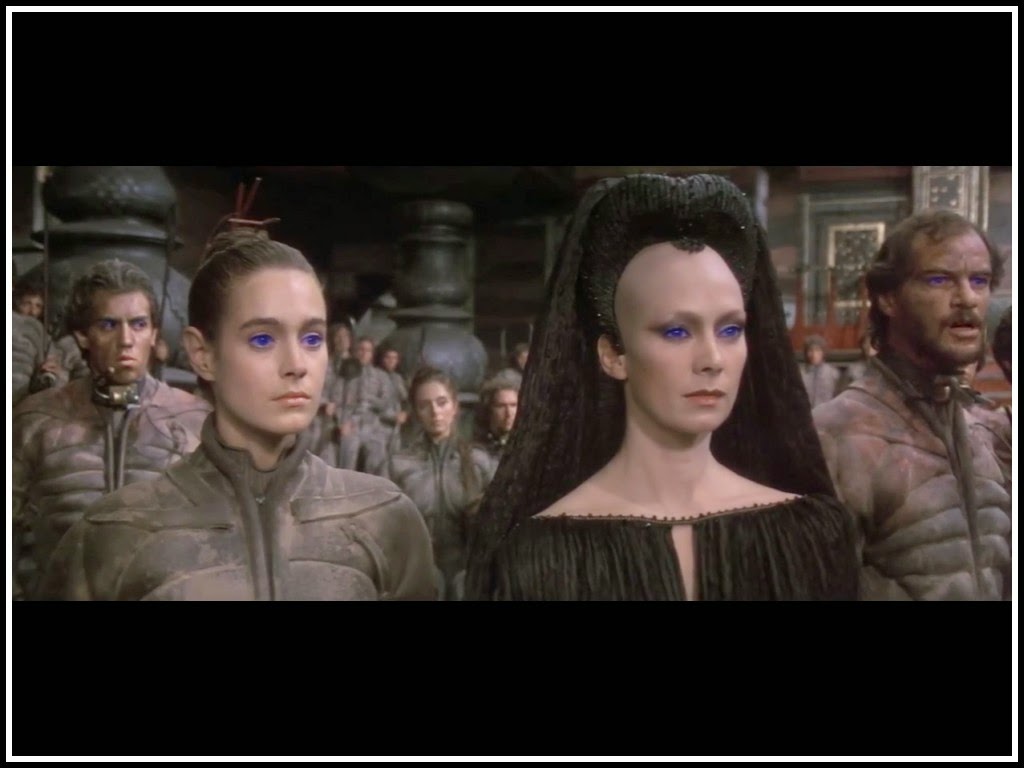 Honestly, I was so proud of myself for understanding the plot by the end of this movie, and so charged up by all of the things that Paul ends up doing, that I have to say I really liked it. But complexities and rushed plot might exasperate some.