Water Babies (a.k.a. What the Hell Did I Just Watch)

Started watching The Water Babies at the gym on my iPhone because my Netflix recommendations had been hounding me about it for a while and I am baffled at what I just watched. 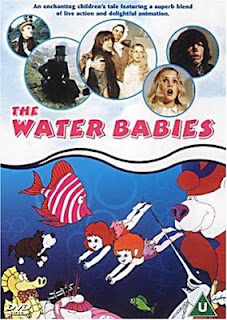 In hindsight, this cover maybe should've been a hint...

The film starts out as a live action doodad set in London around the early 1800's. The main character is a boy named Tom, who we find out is a chimney sweep orphan working under the apprenticeship of Mr. Grimes (how appropriate) and his buddy Mr. Masterman, whose purpose is a bit unclear. Mr. Grimes and Mr. Masterman set out to the Yorkshire countryside under the pretense of sweeping some lord's manor house chimneys. Unbeknownst to Tom, they have a plot to go in and steal a bunch of this lord's silver and make off with it. One thing leads to another and Tom ends up getting blamed for the stolen silver. After the only hilarious scene in this movie (which includes a lot of yelling "Stop! Thief!"), Tom runs away for fear of being captured and sent to the gallows. He jumps into some creek and ends up turning into a cartoon himself and making friends with sea creatures on his quest to find the "water babies", the people he's been told will get him home. 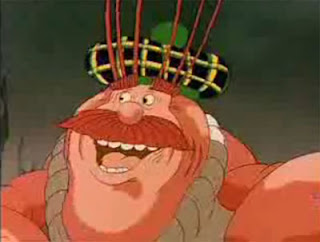 Nothing more clever than a Scottish lobster I always say...

So I was actually looking forward to this a little bit. After getting over the appearance of the cover, I was like "Oh! Cool! English period drama! My favorite!" and then with the introduction of the little boy, I was kind of like "Huh, you're voice is kind of weird. But sallying forth anyway!" After the appearance of George Banks from Mary Poppins (whose real name is apparently David Tomlinson), I got super excited and waited for the action to kick into high gear.

The minute the boy jumps in the water, the live action opulence is replaced with seriously broken animation. Being a fierce Disney fan, I was really disappointed at the lack of fluidity in the cartoons' motions. Not only that, but all of the characters are like a punch in the face of personality. I don't know if it's their weird facial expressions paired with the jumping frames that make them seem almost scary, or if it's their voices paired with their strange clothing, or if its the fact that they look like they've been drawn by a fifth grader, but there is something seriously awry here. 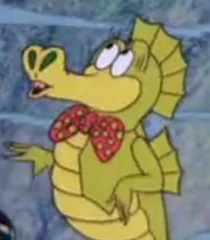 Also, I couldn't figure out if this sea horse was supposed to be gay or not
Seriously.

Additionally, the movie takes about 45 minutes before you even reach the cartoon bits and then the ending takes another half hour of live action. I bet any kid would be bored out his mind before being let down by the terrible songs and disappointing drawings.

In short, if you didn't get it at this point, I really didn't like this movie. It didn't make much sense, even for a kid's movie. Would've liked to see the whole thing as a live-action thing.

Actually, come to think of it, what was the point in making this a period drama? This could've easily been set in present day with more money going to the animation crews than the sets. Boo.

3 outa 10. And the only reason it's not a 2 is because of David Tomlinson. Who I now love.