Chernobyl Diaries: What a Disappointment

If you had a plot that revolved around a bunch of teens getting stuck in the Ukraine it would be pretty scary on its own. When you up the ante and make their precise location in the Ukraine the very spot of the biggest nuclear disaster in known history, you'd think that would be ample fodder for a decent scary movie. 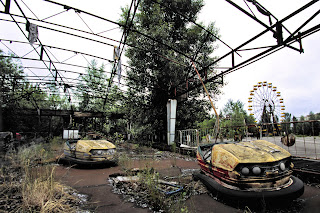 I mean, this place has horror written all over it.

What you get instead with this film is a no-nonsense Jesse McCartney (yes. really.), his girlfriend, her friend and his idiotic brother wondering around an abandoned apartment complex/woods for a day and a half and getting attacked by mutant human beings that we never clearly see.

Yes. That we never clearly see.

Let me elaborate. Jesse--I mean, Chris (McCartney) and his girlfriend are traveling around Europe along with his girlfriend's friend Amanda, ultimately going to Ukraine to visit Chris's unruly older brother, Paul-the-Idiot. Paul-the-Idiot somehow ropes the whole group into going on a tour of Pripyat, the site of the Chernobyl disaster. How fun right!? Little do they know that the site is actually occupied with people that never got out and are now the equivalent of mindless zombies that only hunt for food. Or something. While they're definitely not friendly we never really find out what it is they are after. 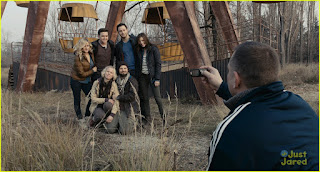 Wanna know how I know you're gonna die? Haven't
you guys ever seen Descent? NEVER take a picture.
Terrible luck.

I just cannot get over this missed opportunity. They could've had a gem like The Hills Have Eyes going on here, made twice as creepy by the bleak skies of Ukraine. Yet they sell the story short by making it vague and focusing too much on the drama between Chris-the-Valiant and Paul-the-Idiot. The creepiest thing about this film is the abandoned feel of the replicated Chernobyl site (which I'm betting they blew most of their budget on). Other than that it's a lot of over-acting by an aged pop sensation and a lot of people being dragged away to nowhere. 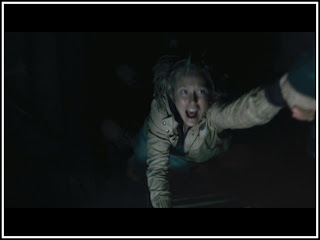 Woops, there goes another one

Admittedly, it's always difficult to make a movie out of a horrible disaster, no matter the genre. A film about a tremendous human tragedy cheapened by Hollywood gore and cheap jumps doesn't really seem right, and maybe they were timid about this in production. (Seriously, Google some of the pictures from the real-life radiation side effects. That shit is no joke. It's actually horrifying.) That being said, better to not make a movie at all than to make one as half-assed as this one feels. Shame on you, Bradley Parker. Shame on you.

Not terrible, but really such a waste of what could've been a really creepy and interesting plot.