I haven't seen a horror movie this well-made, or this depressing, in a very long time. Honestly, when I saw the trailer, I thought it was going to be a lofty, artsy kind of horror, more along the lines of It Follows (which I wasn't very fond of) than The Conjuring (which I loooooved). But I got the pleasant surprise of discovering that it's sort of a mishmash of traditional horror and something a bit more artistic. 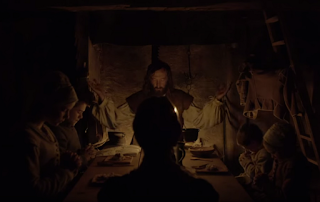 "Dear Lord, lmk if my daughter's a witch, kthanksamen."

The movie starts off by showing us a family leaving their home at a colonial plantation. There's a mother, a father, two girls, and three boys. After making a home for themselves in a random field, things are not going in their favor. The corn crop is no good and they're having trouble trapping animals for meat. Soon after these things come in succession, the family's eldest daughter, Thomasin, is playing with her baby brother outside, when suddenly he's gone, disappeared. While this is viewed as a strange tragedy, and one that the mother never seems to recover from, the family can never find closure on what actually happened to him. Then stranger things start to happen. Caleb, the second oldest child, gets lost in the woods, and the parents are distraught. With one coincidence piled on top of the other, the idea crops up whether they have a witch on their hands causing them all of this pain and suffering. The film then speculates whether the family will believe the truth on faith alone. 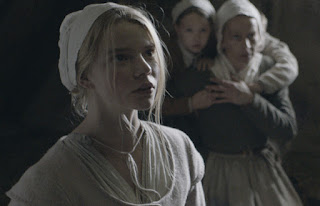 Can you handle it? I pose that you cannot.

What I really loved about this film is that it's so original. We often see horror movies where people get killed off and you're left to sit there wondering who the murderer is, but rarely is there a well-made horror film in which the characters seriously accuse one of their own of being possessed. And the isolation of the family makes the film even more dreadfully horrifying. With no one to bear witness to what's happening besides themselves, and with a zealous faith that defies reason, it's a breeding ground for paranoia.

The other amazing thing about this movie -- which I wasn't expecting -- is that there is an actual witch. I feel like so often anymore, it's an infuriating habit for films to be like "Idk, WAS she a witch? I leave that to interpretation." That drives me insane. Was she or wasn't she. I don't want to have to read through a 30-page analysis of your film before I learn that it was about the gas crisis in the 1970s and not about witches at all. Yes. There is a real witch in this. And the film makes it a point to show her early-on so that we have no doubt as to the foul play. But it also takes careful time to make sure that you can see how the family would think Thomasin is a witch, too. And that's what makes it good. Thomasin isn't crazy religious, she is so unfortunately present when each tragedy strikes, and messing with her siblings really comes back to bite her in the ass. But the question lingers in the back of our minds how the movie will end. Is she really a witch after all? That duality plays out so incredibly well. It's impressive. 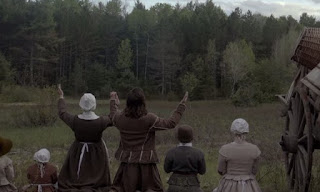 "God, srsly, is Thomasin a witch or what."

Actually, this movie ended up reminding me a lot of The Shining, where you have a family in an isolated situation that could tempt insanity, but where evil is also very clearly present. Would the family accuse their eldest daughter of being a witch if they were back in England? Is there a spell over the woods too? The soundtrack seems to suggest so! (Side note: the soundtrack and a bunch of other shots seriously reminded me of The Shining as well, maybe it's an homage.)

OKAY WE'RE DONE WITH THE SPOILERS.

The only bummer of this movie is that it's so damn depressing. Colonial times were rough enough without having to wonder whether your kids were possessed by the devil. And it's not like there were any psychiatrists around to talk you down when one of your kids went mysteriously missing. The movie is incredibly bleak, but because of this the scares really do scare a bit more effectively than they might've otherwise.

Set-wise this was also very different. The last colonial horror movie I remember seeing is An American Haunting, and the setting alone makes things incredibly creepy. Makes evil seem so ancient and unconquerable compared to slasher or supernatural films that are set today. At least we can call a priest when we need him!

8.5 outa 10. Incredibly creepy -- and this movie doesn't rely on cheap jumps, it messes with your head.