My Big Fat Greek Wedding 2: Like the First One, Minus the Magic

Oh MBFGW2. My sweet baby child. I've gotta be honest, the speed with which Hollywood studios are cranking out sequels to beloved "new classics" didn't have me optimistic when I was walking into the theater. Frankly, the only reason I decided to see it was because my best friend and I have both seen and quoted the original more times than is feasibly countable. "There is a hole in this cake." "Iss okay, I make lamb." "There you go." "E-yahn Meeler." (Literally any time I've met anyone named Ian. Sorry to all you Ians out there.) Anyway, this seemed like more of an obligation than anything else. 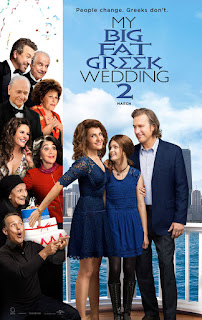 LOOK EVEN THE POSTER IS THE SAME.

The plot (somehow) begins 17 years after Ian and Tula have gotten married. Their kid Paris (worst name ever) is in high school, where Ian Miller (John Corbett) is now the principal. Tula (Nia Vardalos) is still working at her family's restaurant, and is taking care of her parents as they advance further into old age. The main story follows both Tula and Ian as they work on their marriage, Tula and Pairs as they try to deal with her going off to college, and Gus and Maria as they decide to make their marriage legal (due to a paperwork flaw).

I feel like the paragraph above should sum up how all over the place the movie is. Honestly, all that MBFGW2 is is a vehicle to further the personalities of the original film. But in this sequel it simply doesn't hold water. Whereas in the first film there were regular insights and heart to each of the characters despite their overblown obnoxious qualities, the second film forgets itself and decides, instead, to stock up on cheap laughs. This works for some of the characters (Aunt Voula literally saves this entire film from being boring, and Gus delivers some sweet feelings in some parts), but for the most part the lack of central narrative is distracting.

There is a weird mixture here, too, of amateur actors vs. old hats. While the characters of Gus, Maria, and Aunt Voula (played by old pros) can give some depth to the story working with what they've got, a subpar script makes the work by the newbies gratingly abrasive. Even Nia Vardalos who played the role of Tula in the first film so embarrassedly and so sweet seems to have turned a corner in which all of her bits scream "I AM ACTING. THIS IS ACTING. LOOK AT ME ACTING RIGHT NOW." I couldn't figure out if it was her trying to convey that the old "frump girl" Tula was gone for good, or whether she's become so self-aware that the role completely lacks the authentic vulnerability of the original. (Hint: I'm pretty sure it's the latter.)

Also, I'm so sorry, but I felt the part of Paris (played by Elena Kampouris) was done horrendously. While the acting by the original cast is a little clunky, the character of Paris falls completely flat. With hairstyles that rival the Lizzie Maguire 'dos of 2001 and the emotional depth of an emo 12-year-old, Paris's annoyance at her family is her only quality. We never learn another single thing about her. What does she want to go to college for? What does she think about her parents' marriage? Why these puzzling hairdos? Instead of focusing on the new idea of being a first-generation kid with a mixed heritage, the film cheaply compensates with the leftovers of the original. There could've been a cohesive plot there, Vardalos! What were you thinking!? 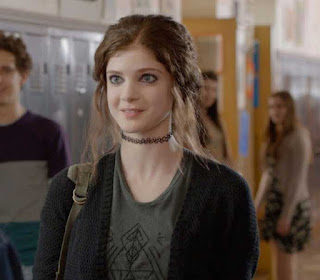 5 outa 10. A handful of laughs, but I'm tired of these dumb sequels that just sell off the bits of the original and fill the rest in with fluff.