Digging for Fire: Sometimes It's Okay to Be Lame

I'd like to take just one minute to yell at the New York Film Critics Series, which led me to believe that Jake Johnson and director Joe Swanberg were going to be IN THE THEATER for a Q&A after the movie. At no point during the ticket-buying process was I made aware that this was a simulcast event that was happening in NYC. Shame on you, NYFCS. Seriously.

ANYWAY. Back to the actual film at hand. 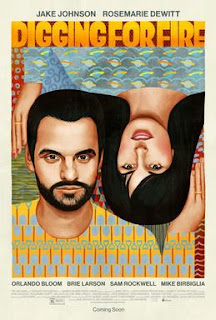 I'd seen Swanberg's Drinking Buddies and I dug his naturalistic, organic style. He seems to have an interesting fix on good people who get tied up in romantic crises and make stupid decisions, but decisions that (in the long-run) make them realize the value in what they already have.

Okay, that's probably a mouthful to read without knowing what the plot even is, so let's take care of that:

Tim and Lee have been married for several years but are by no means old. In their mid-thirties (I think), they have a young son and while they like each other, they're experiencing some bumps in their marriage. As they house-sit for one of Lee's clients, Tim discovers a bone and a gun buried in the hill adjacent to the house. During a weekend away from each other, Tim takes the opportunity to try and dig up whatever's buried in the side of the hill while Lee has her own adventures. At the end of the weekend they each learn a lot more about themselves and what they want out of their marriage. 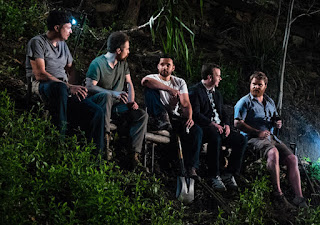 And what you find when you dig in hills.

There's something really sweet-sad about Swanberg's movies between this one and Drinking Buddies. They're so relatable on such an uncomfortable level. Anyone who has ever gone through a rough patch in a long relationship knows how easy it is to get curious about what you could be missing out there. While Tim "innocently" bonds with a young girl his friend brings along to a house party, Lee's adventure leads her into the path of a man she meets in a bar. There's an undercurrent of danger there. Is it as simple a fix as temporarily finding someone else who has an interest in you? Is it just the intoxicating possibility that you have options? 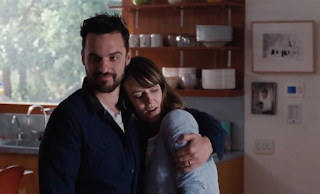 But what's a little creepy, too, is that these are not bad people. And even though their intentions might not be pure off the bat, the walkabout that they go on over the course of the weekend is interesting. While each of them seems terrified of becoming old and irrelevant, they end their journey learning that their life together is a better adventure than the nostalgia that they feel in looking backwards.

I think that there must be a certain level of "oh no, I'm getting old" for anyone as they age, but it must be especially weird for new parents and young couples. One of my favorite clips in the entire movie is when Tim comments on how it's a widespread thing that older people say how they don't think of themselves as old, but how this, in and of itself, is such a byproduct of actually being old. I think another major thing that Swanberg does really well is to subtly show us how nostalgic Tim and Lee are to be young again, but how, once they live life the way they visualize, they aren't equipped for it anymore. Tim unsuccessfully tries to describe to old party buddies the joys of fatherhood, and Lee impulsively buys a leather jacket. It's only by the end of the film, and after their sordid adventures, that they realize how well-equipped and happy they are in the life that they already had, together.

7.5 outa 10. Good stuff, and makes you think. Well-acted by a great cast and thought-provoking without being overly dramatic or in-your-face.