Selma: The March for Voter Rights

In light of Martin Luther King, Jr. Day yesterday, it seems appropriate to write about a movie that I saw on Saturday: Selma. Much in the way as watching movies like 12 Years a Slave feels necessary, Selma brings to life the events that happened at that time and place during the Civil Rights Movement with shocking visuals and a moral outrage that (thank God) pays off at its conclusion.

Selma follows the actions of Martin Luther King, Jr. and his followers after four black little girls are killed in a church bombing in Selma, Alabama. In the time that follows, Martin Luther King, Jr. appeals with President Johnson to push through a federal voter rights bill that will secure the vote for African Americans and cancel out Jim Crow laws like poll taxes and other restrictions that hold them back. When Johnson refuses, deciding to focus instead on the war on poverty, King heads down to Alabama to organize peaceful protests. Despite the efforts of the black people in the area to remain peaceful, the local government continually and brutally obstructs their efforts, beating people in the streets, and killing more than a few in their frenzy to remain segregated. The struggle of these people to defend what rights they technically already have, but are being barred from, is nothing short of awe-inspiring bravery. 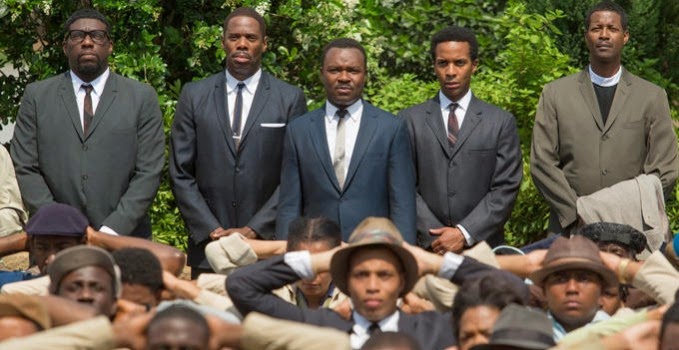 The first advice I have for anyone going to see this is: bring tissues. While these are things that you hear about and can see reruns of on the news, the disturbingly cavalier way in which these white officers beat down the elderly, attack the peaceful, and kill the innocent made my blood boil. Not to sell short the recent events in Ferguson, or discount racism that still exists today, but it's horrifying to see blatant beatings carried out by not just police officers, but endorsed by state elected officials as they seek to preserve a way of life as outdated as picking cotton.

While the film brings MLK to life, and it's nice to see the largely solemn leader on screen joking around with friends, what it portrays best is the reality of the danger at that time.  While it's never been a secret that these were dangerous times for Civil Rights fighters, it's incredibly inspiring to see those that were moved to this cause despite the insane violence that met them at every turn.

In an incredible stroke of luck, I was asked to this screening by a family friend and invited to a talk after the film given by a man who actually marched during the infamous March to Montgomery that the film portrays. While he mentioned that the march provided safety in numbers, he rode back to the airport in a car with another white man, and two African-American preachers. While riding he was enlightened by their sharp eyes for what was and wasn't an acceptable filling station for black people, and stated that he never before had been so aware of traffic laws and the importance of following them.

While Selma is admittedly a dramatization of the events that happened in the town of the same name, there's something to be said for the explanations it makes along the way. For example, you learn in school that they wanted voter rights, but never really why. In one scene, King explains the gravity of things being allowed to perpetuate in the South (and elsewhere) because when black people aren't allowed to vote, they are almost constantly outnumbered by white juries who then can vote against convicting whites accused of violence.

The only things that bothered me were the fact that King's speeches in the film were not taken verbatim (due to some copywriting issues with the King legacy) and also the portrayal of Lindon B. Johnson. It's historical inaccuracies like these that usually make me steer clear of biopics, but by and large, this movie is worth the watch.