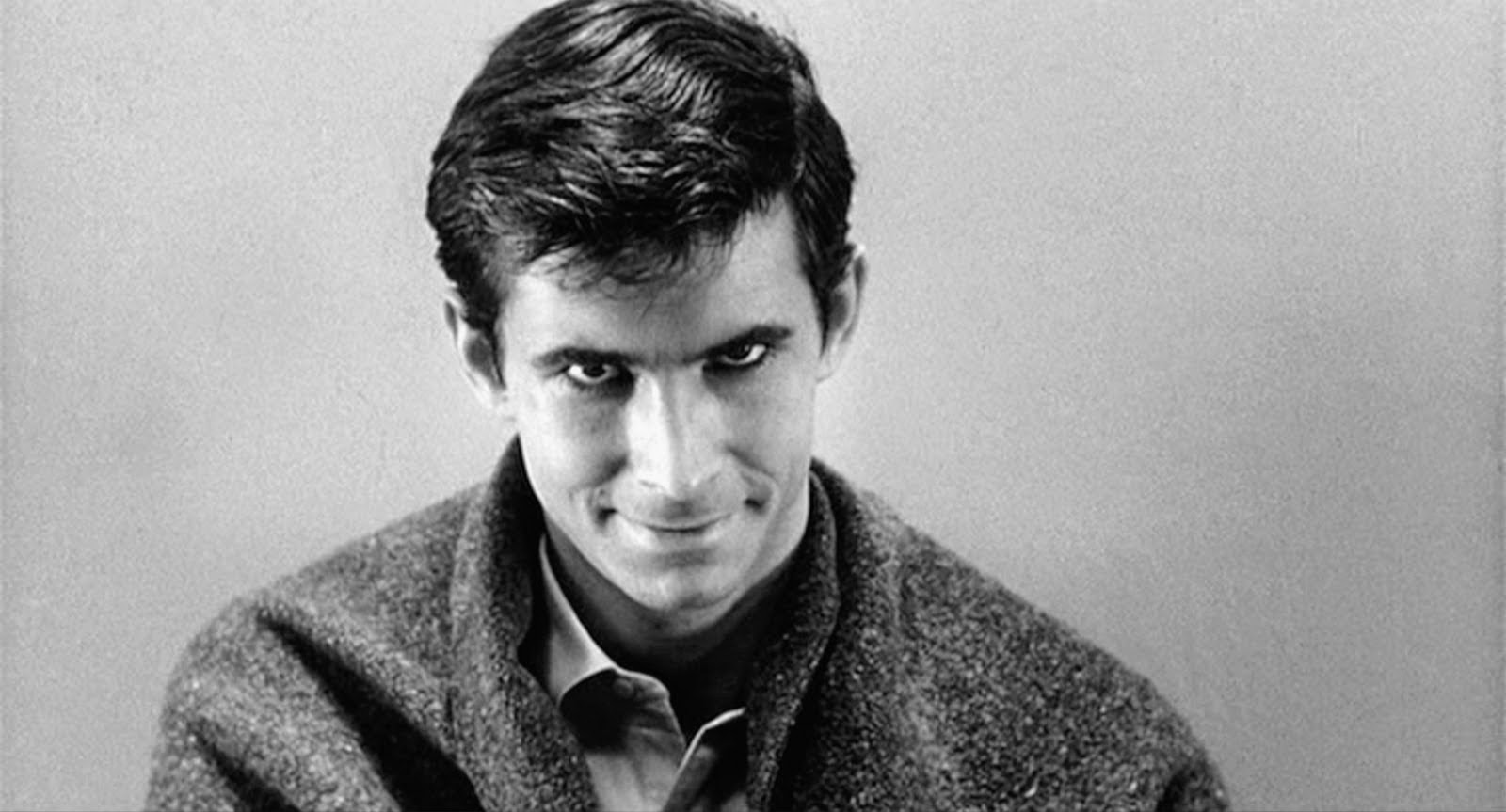 Taking note of this year's severe lack of scary films that actually look worthwhile, I've decided to compile a list of my favorites of all time. Now, I use the term "scary" pretty loosely. These are thrillers, slasher flicks, campy horror, creepy classics, and regular ole scary movies.

This started off as one list, but there are so many good ones that I wanted to include (and since imbedded YouTube videos can make the page lag pretty bad), I split it up into two lists organized by year. This list rightchere is the best horror flicks up until 1990.


THE BEST SCARY MOVIES OF ALL TIME (PART ONE)

1. Cat People (1942)
Had to watch this one for my first film class in college and it still sticks out as one of the best examples of Don't-Show-the-Monster, possibly leading the forefront behind this kind of shadowy suspenseful editing. The story follows an American guy who marries a Serbian girl only to find out that she is terrified of a family curse that causes all of the women to be jealous ladies who can turn into (you guessed it) Cat People. It sounds cheesy, and it's admittedly pretty dated, but watch it to see the earliest examples of sharp editing creating suspense. I still find the pool scene pretty creepy (yes they had pool scenes even in the scary movies of the 1940s).

2. The Uninvited (1944)
Probably one of the first scary movies that I've ever seen. I don't know when renting movies from the library became gauche, but in our family The Uninvited was a damn staple and the local library had the only copy that I have ever seen. Seriously, I've actually never heard anything about this movie ever again and find it hard to believe that more people haven't seen it. Might've been the crappy quality of VHS tapes, but I vividly remember thinking "Holy crap, for the 1940's, that ghost looks REAL." Pretty creepy, even for the 1940s, and definitely an underrated horror flick.


3. Invasion of the Body Snatchers (1956)
I haven't seen any of the remakes of this one, but the original I found to be pretty good, enough to not explore the other ones. In a small town, a raving lunatic (presumably) is picked up off of the streets for ranting about aliens. Telling his tale to the police, the movie unravels and we learn that he was a doctor, and that he uncovered a bunch of different patients who came to him seeing changes in the ones closest to them. While nothing was ever clearly wrong, they were noting that their loved ones seemed distant, and blank. After a time, the doctor uncovers the reason: aliens have been making copies of people, growing them in pods, and doing away with the originals. Be careful; they come for you when you're sleeping.


4. Psycho (1960)
One of the best early examples of effective psychologically-imbalanced-people horror, we follow Norman Bates and his murder of a young woman at his family hotel. Still creepy even now, the black and white creates a high contrast backdrop for the multiple good vs. evil battles highlighted in the film. Still unnerving to see Norman run into the basement dressed as his mama in the final scene. And the above scene still seriously gives me the chills. The direct eyeline into the camera. Good job, Hitchcock.

5. The Birds (1963)
This was another library staple (why did we rent so many old, old scary movies when I was little...?). The special effects, the character development (that's Jessica Tandy as Mitch's mom, btw), and of course, the man with the pecked-out eyes. Pretty visceral stuff for the 1960s, and what's scarier than getting attacked by a gigantic flock of birds? I freak out when a pigeon flies too close to my head; the nightmare of them intentionally flying at me (see: the phone booth scene) is damn scary.


6. Rosemary's Baby (1968)
Oh nbd, you're just pregnant and your baby happens to be a demon. This one is particularly scary for women; new moms might want to stay away. Rosemary's just moved into a lovely NY apartment with her new husband and shortly thereafter finds herself pregnant. But her pregnancy is going rather strange. She's in nearly constant pain, looks awful, can't sleep, and is developing some bizarre eating habits... The neighbors across the hall aren't helping much either, giving her strange herbs and shakes and being a bit more concerned about the baby than they should. Creepfest in the extreme, especially if you're seeing it for the first time. Sharp editing and multiple twists keep it a classic.

(NSFW, as if you needed warning.)

7. The Exorcist (1973)
Well duh. Only (arguably) the scariest movie ever made. Some of the special effects are a bit dated, but damn. This one still terrifies me. Regan and her mother are in London for her mother's acting career when the little girl starts acting weird. Weird being the understatement of the century. I'm not going to go on about everything that happens in this movie because you've probably heard it already, but rest assured it's still super-effectively horrifying.

(Not for the faint of heart.)

8. Texas Chainsaw Massacre (1974)
Gross. Ah. Help. My sister and I rented this YEARS ago and the image of Leatherface hanging a perfectly fine, conscious person on a meathook by her back still gives me the chills. The terrifying thing about this movie is actually the way that it's edited. Not a ton of closeups or unrealistic blood spurts, this seems horrifyingly realistic. I'd never want to see it again (not a fan of torture movies) but that only stands testament as to how incredibly terrifying this movie is.


9. Jaws (1975)
Don't go into the water!! Oof, born and raised in a coastal town, this one just hits a little too close to home. Not so scary now, as it's a little dated, but this age-old tale of a town terrorized by a giant great white is still enough to make me a little skiddish about swimming in the ocean. And it's Spielberg. So that.

10. Carrie (1976)
This movie has it all: a psychotically religious mom, telepathy, and pigs blood. Carrie's the school nerd that everyone hates for no reason. A quiet kid, she comes under the scrutiny of her classmates after they get in trouble for aggressively bullying her. Things come to a head at the notorious prom. A good look at the consequences of bullying and of having a freakin' insane mom (really, when you think about it, it's a wonder that Carrie ends up as normal as she is before the prom scene). Skip the remake and watch the original.

(Couldn't find a good scene that didn't give something away, so this dated trailer will have to do.)

11. Alien (1979)
You're trapped in space with an aggressive alien that you can't kill. Scary? Um, yes. This is where it all began. While the effects are (to use the word again) a bit dated, the suspense of not knowing where the alien is coupled with the two big plot twists are enough to allow this one to stand the test of time. To be honest, I like the effects in the second one better, but it becomes (as most sequels do) a bit of a caricature of the first one (especially with the addition of the stereotypical soldier people. yawn.)


12. The Shining (1980)
Creep, creep, creepy. A man takes his wife and clairvoyant son to become the grounds keeper at an isolated Colorado hotel for the entire winter. Is it the isolation driving him crazy or is there something seriously wrong with this hotel? Kubrick delivers an unsettling film with an even eerier soundtrack. Not downright terrifying, but definitely delivers an unrest that stays with you for a little while. (If you like the movie, try reading the book. Excellently written and, in my opinion, even scarier than the movie.)


13. Poltergeist (1982)
"It knows what scares you. It's known since the beginning." I would argue that Poltergeist is one of the best executed scary movies. Even if you take out all of the scary bits, the acting in it can stand by itself. One of my biggest qualms with the horror genre in general is that characters are consistently underdeveloped and unrealistic. In Poltergeist, the family reacts understandably when their house turns on them and abducts their youngest daughter. Not just scary, but incredibly well edited and acted, I still think that Poltergeist is one of my favorites. (And seriously, if that clown scene doesn't freak you out, there's something wrong with you.)


14. The Thing (1982)
Along the same vein as movies like Invasion of the Bodysnatchers, The Thing follows an arctic expedition camp who have uncovered a strange creature. As it begins picking off members of the team, they begin to realize that not only does it kill these people, but it assumes their identities. Scary in the "I don't know who my enemy is" sense, The Thing is eery beyond all reason. Perfect example of well-executed practical effects as well. (CGI be damned!)


15. Hellraiser (1987)
A man opens a puzzle box and all hell breaks loose. Literally. After summoning the Cenobites, Frank is literally torn apart in a weird sadomasochistic labyrinth of chains and hooks. But after discovering that blood will ressurrect him, Frank employs his former lover (who's sporting some of the most hilariously awful makeup I've ever seen) to kill randos on his behalf. The only person who can stop him is his neice. Some really incredible practical effects. Big fan, very creepy even now.

Halloween (1978) I'm sorry, but I can never get into it. I've tried to watch it several times and walk away kind of like "Meh." I get more annoyed with all the characters that can't outrun Michael than scared about how he's stalking them. I dunno. Say what you will. It's too slow and it doesn't hold up with dis critic. Sorryyyyyy.

Suspiria (1977) This one was mentioned on several lists I found, but I've seen it and I'm just not a fan. Anyone who reads this thing with any regularity will also know that post-dubbed sound drive me nuts.

A Nightmare on Elm Street (1984) Kudos for a scary plot (you're not safe when you sleep, etc.) but I just hate the main character way too much in this. She's so incredibly annoying. Honorable mention for special effects though.