Until Sbornia Do Us Part: A (Pretty Funny) Commentary on Cultural Appropriation

I wasn't expecting much going into this film, honestly. I thought it would be one of those straightforward, preachy pieces; a clashing of cultures that didn't necessarily bring anything new to the table. But the comical nature of the film, along with some great characterization and funny cultural misunderstandings, really won me over.

The story takes place on a land mass called Sbornia. Sbornia is connected to what they call The Continent by a small strip of land, but is kept completely isolated from it by a wall made out of volcanic rock. (It should also be noted that Sbornia is home to a huge volcano that makes up over half of its mass.) One day, during a Sbornian game of Axe Ball, the wall comes tumbling down, and in come the opportunists from the mainland. Taking advantage of a little-known beverage that the islanders drink called Bizuwin, The Continent then moves in to reap the one natural resource that Sbornia can claim as its own -- with disastrous results. 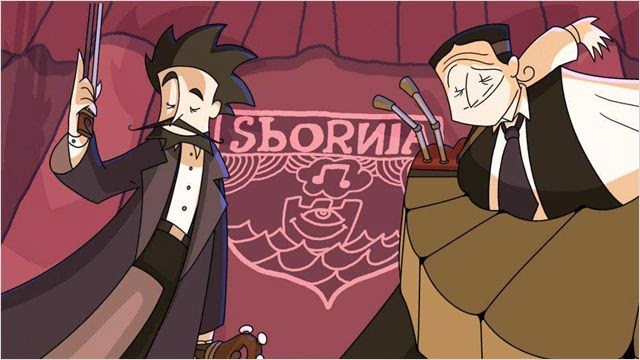 What really drives this movie is its reliance on the two main characters, who foil each other perfectly. Kraunos and Pletskaya, two Sbornian musicians, have to deal directly with the consequences of The Continent interfering with their personal lives. Kraunos, a quiet and traditional man, is sent over the edge by his wife's new fascination with Continental culture. And Pletskaya, a hopeless romantic, has to deal with the very rich, Continental parents of his new love Cocliquot. Their reactions (and, in the case of Pletskaya, nonreactions) to the changes unfolding around them contrast each other in a way that keeps the story from getting too serious.

Laughs also come in the form of the cultural misunderstandings between the people of Sbornia and their Continental counterparts. Sbornian people sleep upside down, lick faces in greeting, dance by shaking their heads, and play a sport that relies on the throwing of actual axes. They really indulge the fear of completely different (yet largely harmless) cultural differences. The looks on the Continental people's faces when Kraunos hocks a loogie on some aristocrat's kid (to say hello). Hilarious. 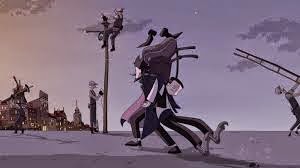 In terms of animation style, this one stood out for its interesting color palette, made up of mostly sepia-toned red, blue, and yellow. The muted tone helps to reflect the old-timey, time-gone-by impression that the plot highlights. It's also nice to see a straight-up cartoon. Great sound editing, songs, and playful shots that really only read well through cartoons (i.e. getting hit in the face with a 20-lb. wooden ball and having it sink into the chest cavity instead of some pretty gross carnage).

A small issue that I had with this movie, was their flitting between seriousness and comedy. While the impression I got of this film was overwhelmingly funny, at times they seem to be like "oh wait, but this is an actual problem, we should take it down a notch." Because of this seeming conundrum, they get a bit caught between going for real physics and cartoon physics. At a more serious point in the story, Kraunos discovers that his wife has bought some things from The Continent and throws them into the fire, burning his hand. In the next scene, his hand is bandaged. Contrarily, another character, at one point, (as aforementioned) is hit in the head with a heavy wooden ball and hoists it off of his shoulders, completely unharmed. I get it. It's a cartoon. You can kind of do whatever you want. But have some continuity.