The Conjuring: If You Think Witches Are Obsolete, You Are Wrong.

As a teenager I was pretty religious. Not in a weird person way (at least I don't think so), but let it be known that I regularly went to church and still have the books of the Old Testament memorized thanks to a song I learned when I was nine. 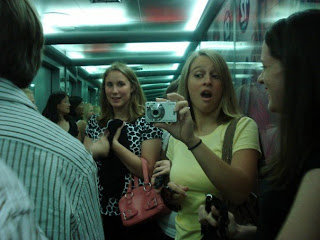 See? No hoodless sweatshirt with bright white tennis shoes.
(Does anyone else picture religious fanatics this way? Just me?
On a separate note, remember when digital cameras were still a new thing?)

But my background has made me a little...sensitive to movies about demons.

Plot: A husband, wife, and their five daughters move into a house that they've recently bought from a bank auction. The house is very old and needs some work, but they seem cheerful enough to move in.

But then (of course) weird things start to happen. During a game, the mother confuses the claps of her child with those of a resident child ghost. Pictures fall off the walls. All of the clocks stop at 3:07 a.m. Children's feet are grabbed while they're sleeping in the night. One of the daughters begins sleep-walking. One sees someone in her room and smells rotting meat. And during one terrifying night, the mother is dragged down to the basement and tormented by a demon, while her two daughters are locked in their room and attacked by the ghost of a witch. People are hurled across the room and the family is reduced to all sleeping in the living room. 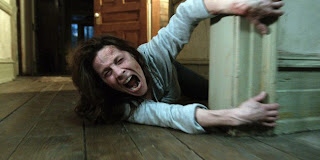 See? Dragged to the basement.

While this plot line is moving along, we are also introduced to Ed and Lorraine Warren, experts in the paranormal field. Not frauds, these two are dedicated to helping people debunk their "ghost stories" and help solve any that happen to be real. When approached by the mother of five, they decide to help her. Lorraine, a psychic, sees the demon latched onto them all as soon as she enters the house (giving a reason, in this instance, why they can't all just "RUN!!"). She also gives insight as to why there are so many ghosts in the house: a child and his mother from the turn of the century, a maid, another woman, and the demonic presence of a witch that had been hanged on the property during the 19th century.

After the Warrens come to help, things gets cray. That's all I'm going to say. Prepare to be scared. 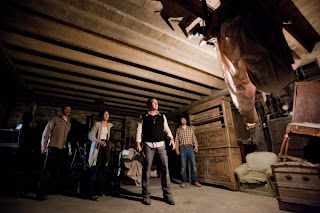 Yes. That is a woman wrapped in a sheet, sitting in a chair.
Upside down on the ceiling.

I would say that The Conjuring did give me some trouble sleeping. If it hadn't added the quotation before the credits from the real Warrens on the reality of God and the devil I probably could've put it out of my mind a little bit more easily. Seeing the picture of the real family during the end credits didn't help much either. If you'd like to learn more about the real story behind The Conjuring (which, let's be honest, could be a load of crap), check out www.chasingthefrog.com, a site which examines the verity of various Hollywood films "based on a true story."

The only thing that bugged me about this movie (which, in hindsight, I should probably be grateful for), is that they didn't make the witch look all that scary. After looking at IMDB, the witch's role is apparently played by a man (not unlike the role of Zelda in Pet Sematary). However, it's clear that there's something a bit...off. She looks a little too weird to be true, and it diminishes the thing that makes the movie so scary: its basis on fact. 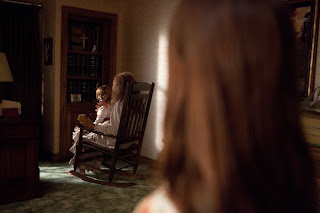 With the exception of this scene. During which I nearly peed my pants.

So, in conclusion, The Conjuring I found to be pretty frightening. Like so many other modern demon movies, the fact that there is a malevolent spirit latching onto people rather than their properties is terrifying. We're not dealing with a poltergeist. We're dealing with evil. And that makes the movie especially scary.

8 out of 10. If you're looking for a scare, you won't be disappointed.