Jane Austen has become somewhat of a hot commodity in recent culture. We've got movies and books based on, adapted and spun off of the authoress's numerous love stories coming out our ears. Pride and Prejudice With Zombies, Becoming Jane, Confessions of a Jane Austen Addict, Clueless (true story; adapted from Emma), and who hasn't seen the BBC Pride and Prejudice? (Rhetorical question; obviously you all have. And if you haven't please find yourself a library immediately) Being an avid Jane Austen fan myself, I was so excited when I got the opportunity last night to see upcoming film Austenland starring Keri Russell, Bret McKenzie, and JJ Feild. 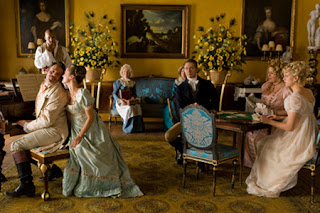 *Let it be noted that I was ten minutes late to the movie because my mom and I couldn't find a parking spot. Damn Narberth parking!

The movie is centered around Jane (Russell), a woman who has been "unlucky in love." Her obsession with Jane Austen bars her from being able to participate in her own life as she is so fixed on finding a man that fits her "fantasy."  When she finds Austenland, a real manor house set up to mimic the English Regency Era with everything from clothes to food to decoration, she feels she's finally found somewhere where she can fit in. Almost immediately she meets the acquaintance of both a servant named Martin and the lady of the manor's nephew, Mr. Henry Nobley. The rest of the film shows her inexplicably flitting back and forth between the two like a pinball and picking one of them at the end. 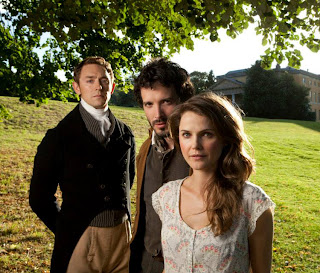 Hi guys, just FYI: I love both of you. Does that work for you? Ok, cool.

I was really disappointed by this movie. You can't appeal to Austen fans and then take away their glory by making your main character a muddle. Here's my problem: Jane is supposed to be a crazy-ass Austen fan, but she doesn't play along with the Austenland game for more than ONE DAY. Um. WHAT?? Anyone who has read an Austen book more than once and seen the movies based off of them should know that taking off with servant would be a CLASS 4 NO-NO. And yet Jane does it without a care in the world. Not to mention the fact that she latches onto this guy after, like a day. Stage 5 clinger. Even in modern times.

Also, for my fellow avid movie-goers, you may be halfway through the movie thinking "Wait. Something is not right." Both men both seem to adore Jane equally and she seems to like them both equally as well. For those of us well-versed in romcom lore, we know that this is simply weird. No conflict = no story. So where's the damn conflict? It doesn't come into play until the third part of the movie, which takes too long, and feels like you're spending the majority of the movie holding your breath. And then by the end you're like "Wait a second, how can you really be in love with this guy when you were acting in love with the other---wait, what?" 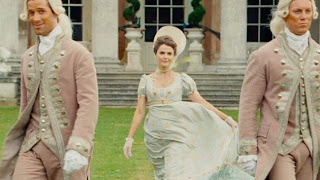 Unlucky in love, my ass.

I really hate to see a good plot go to waste. They could've done so much more with this. In my world, Jane would go to Austenland intent on enjoying every freaking moment, playing along with all of the rules and concepts, become disillusioned with the facade, and then fall in love with the servant. Done. That's all you need. Shazam. Not all this confusion about oh, The Regency Era was really full of honest, simple, good people and modern people suck. Um, no. Obviously you've never heard of a Mr. Wickham, a guy so nasty he almost ruined the marriage of Elizabeth Bennett to Mr. Darcy. Or perhaps a Mr. Elton, who is grossed out by the thought of marrying someone of an inferior social class. Or maybe even John Willoughby, who ends up marrying an ice queen instead of the woman he loves because she's got more money. Please read an Austen book before you write a film based on a fan of hers. P.S. There have always been nasty people in the world; the message of your film is bewildering. 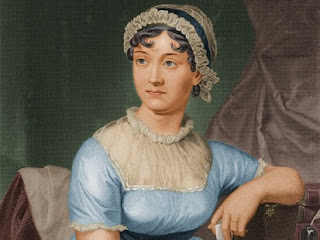 The thing that kept this movie entertaining was its clever use of side characters. Miss Charming (played by the hilarious Jennifer Coolidge) is grossly out of her element in Austenland but gobbles it all up anyway, blunder after hilarious blunder. Also notable are Miss Amelia Cartwright (Georgia King), Colonel Andrews (James Callis), and Captain George East (Ricky Whittle).

In summary, I'm becoming more and more annoyed about this movie. If you want to make a film about an extreme fan, next time pick a Twihard for your protagonist.

4 out of 10 stars. Lackluster, but got saved by the chuckles from the minor characters and their (purposefully) awful British Regency accents.