Wreck It Ralph: The World's Most Endearing Bad Guy

Pixar, how do I love thee?
Let me count the ways:
Your mastery of humor
For kids and adults the same,
While dazzling us with great effects
The result is never lame.

O Pixar, thou great beacon
In the sea of dark,
Where stupid animation
And potty jokes live,
Make our movies great again
With HD, humanity, and wit.

I mean, really there was no other way to express my love for this sweet production company. Wreck-It Ralph is nothing but awesome. Compared with Pixar's other sentimentally heartbreaking movies (anyone else have puffy eyes for days after seeing Up?), this one was pleasant, sweet, and ADORABLE. What's cuter than a big hulking clumsy guy who just wants a hug (says the girl who dates a tender-hearted, 6'4 ex-offensive lineman). It is absolutely impossible to single out any one thing about this movie without busting out a great big smile. Feel-good awesomeness, ladies and gentlemen. 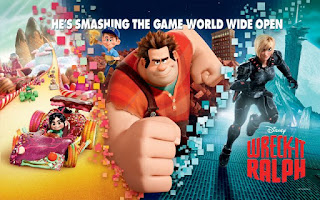 Seriously, this has fun written all over it.

As I'm sure everyone in this country has seen from the trailer, the plot follows Ralph, an unhappy bad guy in a game called Fix-It Felix Jr. The game revolves around Ralph wrecking an apartment complex and his good guy counterpart Fix-It Felix being controlled by the player to fix all the damage that he has done. At the end of each game, Ralph is thrown from the top of the apartment complex into a mud puddle on the ground. As we learn in the beginning, Ralph is upset that he gets treated poorly by the other characters in the game and just wants some recognition (and also a medal....or a pie...). 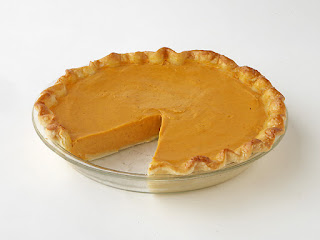 I mean, who doesn't want a pie? (Happy Thanksgiving by the way, guys!)

The structure of the plot revolves around learning how to accept people that aren't like ourselves. While Ralph bonds with a glitch named Vanellope Von Schweetz (voiced by Sarah Silverman, brilliant.), Felix gets close with a strong-willed commander of the game Hero's Duty. Facing opposition from the other characters in her game, Vanellope knows what its like to be an outcast and she and Ralph form a snarky yet loving friendship. As for Felix (voiced by Jack McBrayer, genius.) he learns that bad guys aren't always necessarily bad guys. 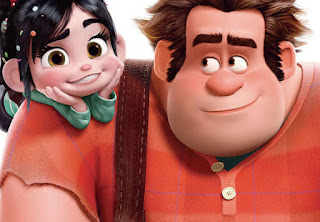 I mean SO FREAKIN CUTE

Clever clever dialogue, some tearjerker moments (I mean, come on, what'd you expect?), and some hilariously awesome characters (look for the devil dogs that help King Candy, I was cracking up). I think Nick and I were laughing harder than the majority of the children in the packed audience. (Also, a bit off topic, but it was so nice to sit in a full theatre for once! So often it's me and Nick and like ten other people...) 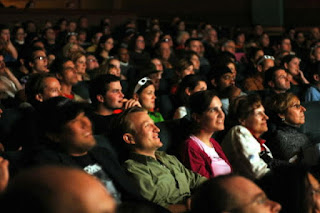 So many fellow cinephiles!

The Pixar moniker has triumphed once more. Get your butt out there and remember what movie magic was like during the golden years of Aladdin and Beauty and the Beast.