We Need to Talk (or Else Severely Repress Memories) About Kevin

Seriously, man. Nothing funny to say about this movie. It's so upsetting and disturbing and sad and creepy. Beautifully and thoughtfully constructed but...damn. 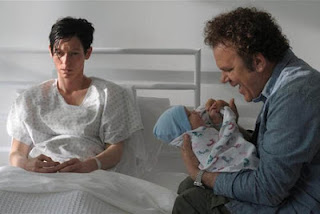 Kevin is the son of Eva (Tilda Swinton) and Franklin (John C. Reilly) and he has been a sadistic son of a bitch since the day that he was born. Crying from morning until night while with his mother and then calm with his father, Kevin constructs a behavioral pattern that sticks with he and his family throughout the rest of the movie. Acting like a normal teenager in front of his father, Kevin seems to live to mess with his mother, testing her every reaction with some sort of violent or emotionally abusive act. The film follows the relationship that Kevin has with his mother his entire life before holding his high school hostage and killing several students inside and eclipses this story with Eva's life after the tragedy. That description should iron out a bit of the sadness and the tangible tragedy of Eva's entire life after Kevin. Punishing herself throughout her post-shooting experience, Eva does things such as purposefully eating scrambled eggs with the shells in them, and letting people get away with slapping her in public for the things that her son did. 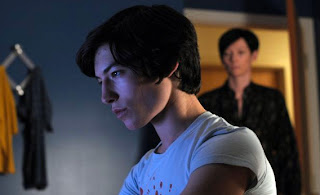 It would be too much to take if it weren't, at times, for the bizarre up-beat soundtrack that follows her around as she goes through her day. It plays as almost a manic denial to the reality which is her life; as if she turns her brain to happy music just to get through a day. And the cinematography in this is actually very poetic and well done also, very stark and blunt when showing the details of Kevin and Eva's past and yet very cerebral and trippy at times when we see Eva's current life. Ugh. Heartbreaking.

This ending will be stuck in your head for days, as it has been in mine.

If you're looking for a true horror movie that won't be leaving you looking for the boogie man or listening for ghosts, this is your film. Kevin gets under your skin with an uncomfortability that suggests that it is sometimes simply the nature of human beings to be evil and sadistic and that it could happen to anyone. All within the framework of an artful and well thought-out film. Interesting mixing of genres.


Someone give me a Disney movie--quick!