Babycakes: "I Just Keep Thinking About the Dinosaurs..."

Oh my god. Ok. To preface this movie, let me tell you all a story.

Once upon a time, my sister was in 10th grade, having an awesome day, and happened to watch a movie on Lifetime called Babycakes. She enjoyed it and promptly got on with her life. Several years later she happened upon it on Amazon or some such site and decided "What the hey? I'll buy it!" After receiving said movie, she popped it into our DVD player and she, my mother, and I all began to watch it. After about half an hour, we were all splitting our sides at this absolutely awful "feel-good movie". Babycakes has lived on in my family (and probably my family only) as a hilarious and hammy classic. 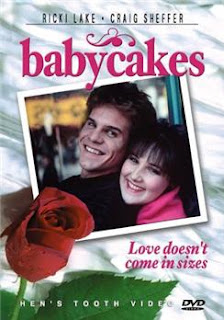 The plot revolves around Grace (Ricki Lake pre-weight-loss): a shy, obese cosmetician for a mortuary. (Yup.) Her life seems to kind of just move along until, after enduring some verbal abuse at her father's wedding reception, she spots her dream guy (Craig Sheffer of One Tree Hill) at a local skating rink. Afterwards, acting like a complete normal person, she stalks the absolute shit out of him. Invades his work place to get his schedule, gets a new bed with satin sheets, gives herself a complete makeover, and steals his skates in order to meet him. 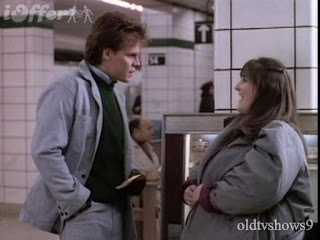 After an incredibly bizarre introduction over some banana splits, she gives him her address and tells him the elaborate dinner that she's going to cook for him. After suddenly getting creeped out that she's asking him over (or perhaps hesitant because his fiancee is away?), he leaves and says he might show up (after she presses his answer like twelve times). Ah and then the fateful dinner. He stays at a bar with some friends and gets totally smashed and shows up at her house five hours late, after she has eaten all the food and totally trashed her own apartment as a result of her disappointment. Rob (yep, his name's Rob) then proceeds to pass out and thus begins their attraction and impending romance (don't worry, I'm not going to spoil all the details for you). 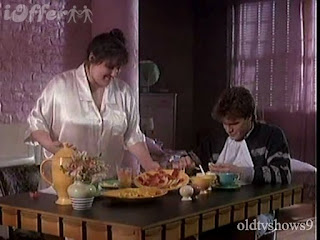 If that description doesn't make you want to see this abysmal riot of a movie, I frankly do not know what will. If what I just summarized makes you think that the movie ends with her being a psychopathic killer, you are thinking of the wrong kind of Lifetime movie. In fact, despite all of her creepiness (ah, the days before Facebook), the movie seems to make her endeavors seem totally and completely normal. And I cannot possibly count the weird tangents in this film, which include an extended metaphor to the dinosaurs being extinct, a "crawling eye", an incredibly catchy keyboard theme song, the excess of pastels, and the interesting ten-thousand-layer outfits that Grace wears.  Not to mention the completely inexplicable 180 that Rob's character seems to suffer. In fact, Rob goes from being a totally normal-seeming fellow into a grown 5-year-old with ADHD. Is this what love does to people? Is this attractive? Apparently.

As a side note, I'm glad that Lifetime's producers were pioneers in making movies about guys who don't mind a little extra weight on their girls. But holy crap, couldn't they have run into each other on the street without her using binoculars and crazy to win him over?

So good and so funny, please see this movie. It'll warm your heart and make you both hungry and paranoid. How many movies can you say that about? Precisely.

(Also, Grace's scrunchies and hair accessories should've gotten their own credit in this movie. There are a ton of them.) 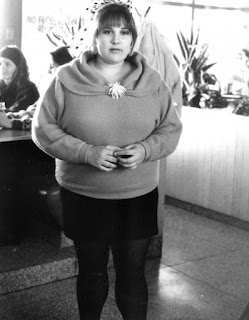 Wish there was a color photo of this pink sweater.
And no, that's not a wedding veil on her head.
...Or is it....

Couldn't find a trailer but (LUCKY FOR YOU) the entire movie is on YouTube! Enjoy!

Alright, additionally, I have been looking all night for this DVD and it only exists on Amazon for upwards of a hundred dollars. True story. So if you've seen this movie on youtube and you wanna own it as badly as I do, write to Hen's Tooth Video (on their website at henstoothvideo.com) and make em re-release it!
Posted by annie_J at 7:53 AM