Seriously who doesn't enjoy an awesome campy movie every now and then? Ashamedly I'm more into campy movies than I'd like to admit. I would have to say that about 1/4 of my streamed movies on Netflix have been Mystery Science Theater 3000s. Totally not normal, totally aware.

So I was bored out of my mind last night seeing as how I'm unemployed now and all and I found this gem that had been popping up on my recommendations for a while: Pinochhio's Revenge. 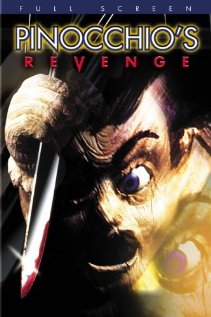 Yeah. It's exactly what you're thinking. Mostly.

So (wow I'm having a really hard time writing this without laughing) in the movie, Gotto is the carpenter that made Pinocchio. Gotto is also a convicted serial killer who is allegedly crazy and gets a death sentence about ten minutes into the movie. Enter mom, whose name I can't remember, and her child, some little bratty girl with curled hair and emotional problems from her parents' recent divorce (surprise, surprise). Mom also has a boyfriend who is way too good to be true and a nanny who is Italian and the film's token hot chick.

The movie is bizarre (as if you couldn't decipher that from all I've said so far). Surprisingly I was more scared by the possessed toy than I thought I'd be, but I think that that's just an imbedded childhood fear of being killed by malicious toys that I didn't love enough (back off ok? I took the wrong lesson away from Toy Story). But nevertheless the film was exactly as deliciously lackluster as I dreamed. 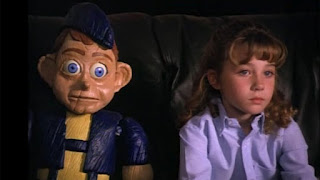 I mean, really, you could check off their plot on a scary movie requirements list:
- Mom is a working single parent who has an obviously disturbed child, but somehow overlooks this herself (see The Ring, Dark Water, Hide and Seek, Carrie, etc)
- Mom has a useless significant other who gets killed by either killer or obviously disturbed child (see The Ring, Hide and Seek, The Shining, Pet Sematary, etc)
- Gratuitous nudity and sex scenes (see all of the Halloweens, and basically any other slasher film ever made)
- Parent doesn't believe their child's claims that there is a murderer somewhere (see Amityville Horror, Child's Play, Darkness Falls, etc)
- Parent either dies or lives with some kind of horrible knowledge that their child was right and they were stupid (all of the films that I just listed, basically) 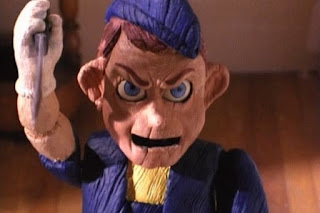 Check, check, check, check. Bingo! We have a campy horror flick. Pinocchio's Revenge does have a bit of an interesting plot twist at the end though, if you watch it (which I doubt) hang in until the end because I was trying to figure out how Pinocchio got out of the trunk at the end.

Final Analysis: Very terrible in a delightful way. Unless you're afraid of possessed dolls.