A Cure for Wellness: A Lesson in Amazing Thrillers

Oh. My God. Okay, at the risk of over-hyping this movie, I was not expecting it to be as good as it was. Especially for a movie that clocks in at 2.5 hours (a fact that I was blissfully unaware of until I was seated in the theater), I was bracing myself for the worst. But the pacing and the intrigue and the mystery of A Cure for Wellness will keep you on the edge of your seat.


AND LOOK AT THAT POSTER ART.

Our story begins when a young, overly ambitious businessman named Lockhart (first name irrelevant) is sent on a mission by his cutthroat corporation to fetch back their CEO, who has spirited away to a Swiss sanatorium. The only clue that the CEO leaves behind is a grim letter that decries the corporate greed and ambition that his company and the world at large so value. When Lockhart arrives at the sanatorium, he's indirectly barred from speaking to his boss, and so he leaves. Or at least he tries to. After getting into a serious car accident on the way back to civilization, Lockhart is held at the sanatorium until his health "improves." But the longer he's held there, the more questions Lockhart has about the unorthodox methods with which the director, Volmer (Jason Isaacs), treats his patients, the vitamins that everyone takes so religiously, and the ultimate "cure."

Wow wow wow. It's very hard to find a film as trippy and mysterious as A Cure for Wellness that doesn't make you completely impatient for the ending. Cerebral, style-heavy movies like this don't often work for me. I get impatient at the visuals dominating the plot and leave the theater rolling my eyes at art getting in the way of a good story. But it's rare to find a movie as beautifully trippy as A Cure for Wellness, too, that is so well constructed and clean. Throughout the movie the stark, bright antisceptic nature of the sanatorium clearly conceals a bigger secret, especially in contrast with the realism of the village below it. And figuring out what that secret is makes the film so interesting.

(Not an infinity pool.)

Generally, poorly constructed mysteries make the mistake of asking a singular question, hoping that they'll hold the audience's attention long enough for a flash-bang finish that takes their breath away. But they are rarely so lucky. The best mysteries are multilayered, peeling back clues and revealing truths, and giving way to the answer of a larger question that you didn't even realize was being asked.

This movie easily could've turned into an existential sort of crisis plot, where the "cure" is mere symbolism and the action driving the plot is purely mental. But in creating a tangible mystery based on legend and history as well as medicine, this movie can be interpreted in all kinds of ways. It touches on corporate greed, family lineage, mental health, the hypochondriacal wealthy, and SO MANY OTHER THINGS. 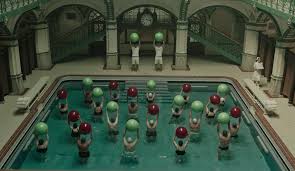 Look at the creepy symmetry of those colors.

A word of warning to the squeamish: like any good horror-thriller there is a bit of gore in this that might gross you out. It had to be said. But as a squeamish person myself, I hope this doesn't keep you from going out and seeing it.

9 outa 10. It's so refreshing to see this much creativity, structure, and beauty in a psychological thriller. So many indie films these days get too wrapped up in themselves, but the ending to Cure ends up being straightforward while still managing to be amazingly pulpy.