Star Wars: The Force is Waking Up

So first of all: hello again. It's been a while.

Second of all: holy crap, if there was a movie that I needed to write about, this one was it.

In taking in the monumental franchise that is Star Wars, I should lead with the disclaimer that I'm not a Star Wars zealot. My plan was to try and see Star Wars and, if it was sold out, to then check out Sisters. But I will say that in being partially removed from the franchise as a whole (i.e. I had only seen the original 3 movies twice, as well as seeing The Phantom Menace) I was able to watch it a little more objectively.

And it's freakin' incredible.

The story kicks off several decades after we last saw our heroes. The Dark Side has been replaced by a neo-regime called the First Order, which is basically the same thing, and the Rebels have been replaced by the Resistance, which is also basically the same thing. The action begins when a member of the Resistance hides a map to Luke Skywalker's location in a droid unit, who is then found by our main character Rey. After a storm trooper (discovering that life in plastic may not be fantastic) deserts the First Order and crashes on her planet, it is up to the two of them to keep the map from reaching the First Order. Along the way, they bump into some old faces, new villains, surprising family ties (again) and a ton of adventure. 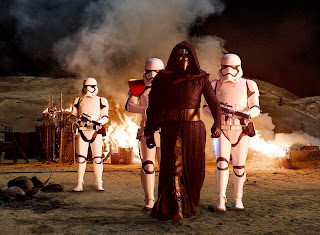 There seems to be a consciousness of what was done wrong in the last trio of Star Wars films, or maybe J.J. Abrams just adds in a much-needed new flavor for this series. In this newest version, there is a balance in everything between the new and the nostalgic. The effects are balanced between CGI and practical, appeasing lovers of the originals, without making them look anachronistic. The characters are both new and familiar, introducing us to new heroes while still dipping back to the most beloved parts of the original films (I'm talking about 4-6, obviously). And the overall feel of the movies has been done cleverly as well: being humorous in a way that is very current while still keeping in mind the lore of the series itself (please see: storm troopers have not improved their aim). 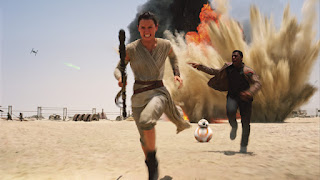 And these two together have a great chemistry!

Honestly, while I'm not going to launch into another diatribe about how movies now like to be annoyingly long, I was pleasantly surprised about how quickly this film moves. There is not a moment wasted on long shots or on anything else that is stylistically "cutting-edge" without adding anything to the plot. The story propels itself forward and the actors in the cast are so marvelous in their roles that two hours and change flew by without me even noticing.

While it must be said that the balance that Lucas finds in this film relies heavily on the fact that a lot of the material is recycled, it's enough at this point to have new characters, however similar their struggles may be to their predecessors.

9.5 outa 10. The effects, acting, story, and everything else were perfect. Check it out.