Maybe it's because they take place in the same-ish era, but that old tale of rags-to-riches is something that we've all seen from What's Love Got to Do With It to The Jacksons: An American Dream to Ray to Walk the Line. Not to say that these aren't great movies, but these unbelievable tales end up sounding increasingly redundant.

That in mind, it's no wonder that Straight Outta Compton is such an incredible breath of fresh air.

The movie follows the origins and breakup of NWA and its members (Eazy-E, Ice Cube, Dr. Dre, MC Ren, and DJ Yella) from their roots in gang-riddled Compton to their rise to fame. And it's insane. 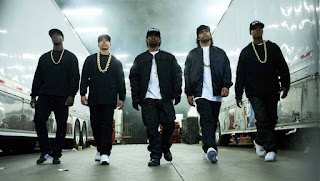 The cool thing about Straight Outta Compton is its timeliness (not like our nation hasn't had race problems since forever, but especially with things like Ferguson coming to a head recently) and its refreshing time period. As someone who was born on the East Coast in '89, it's not like I knew a lot about NWA or that I heard a ton about the race riots in L.A. during the time that the movie takes place. But seeing the gang violence and the police reaction to it in the film creates a framework within which you can better understand the rap of NWA. The movie makes an excellent case for the art of these guys that commonly got written off as violent, and as encouraging violence. Ice Cube says at one point that their art describes what they've been through, and that their windows look out onto a different world than the typical American.

It's hard to divulge a ton of details about the plot, because their story takes a lot of turns, but the comprehensive picture that it gives you of the group and of each of the artists makes it a biopic worth watching. 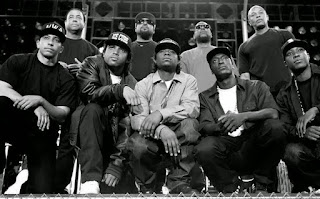 Full disclosure: this movie will also make you hate cops. The amount of times that they get arrested for doing nothing makes their resultant song "Fuck the Police" make a lot more sense than it might objectively. And their raps in general are fucking incredible.

8 outa 10. All in all, it was an amazing biopic. Highly recommend.