If any of you have seen the original Evil Dead, odds are that you weren't that scared. Obviously the movie is a cult classic, but there are so many cheesy elements to it. The acting's not that great (though I feel like Bruce Campbell is half the reason it got popular), the camera angles are a little dated, and the special effects (for the audiences of today anyway) are obviously pretty fake. Fast forward a few decades and you have Evil Dead, the remake. And holy crap. Is it terrifying. I'm pretty sure I didn't calm down until I got home and had a gin and tonic. 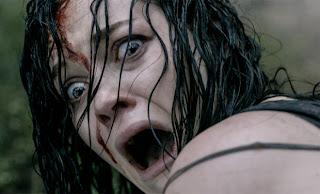 What my face looked like for an hour and a half.

The movie starts out with a group of friends gathering at an isolated cabin that used to be their summer getaway. The friends consist of Mia and her brother, David, his girlfriend, and their two childhood best friends, Olivia and Eric. As it turns out, they have gathered there to help Mia through a hard drug detox and refuse to leave until she's recovered. As they enter their old house, though, it's clear that someone has broken in. In their basement they find carcasses of dead cats hanging from the ceiling and a book wrapped in a trash bag and closed shut with barbed wire. 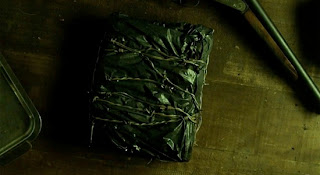 Probably not gonna see this one in Barnes and Noble.

After Eric takes the book in secret and utters an evil passage, he unknowingly unleashes a demon on Mia that turns her into a monster and puts all of their lives at risk. An all-out gore-fest ensues, including a nail gun fight, a girl cutting out a chunk of her cheek with a chunk of broken glass, someone chopping their own arm off, and of course we all knew there was going to be a chainsaw (shout-out to the original fans).

For a scary movie I thought that they did a pretty good job on plot. Even though the one glaring flaw would be why you would want to open a book entwined with barbed wire in a room full of dead cats, I realize of course that there are always these questions in horror movies. Without conflict the plot wouldn't move on, blah blah blah.

Obviously you should read this book.

But other than that, I thought it was cool that they give you a reason for major plot points. Like with most scary movies you're always asking "WHY WOULD YOU STAY THERE?" but since the friends are prepared to bear down on Mia, it makes sense that they don't want to leave right away. Also the fact that she's going through detox at first explains some of her weird behavior. The friends (with the exception of Eric, who is suspicious that he may have risen a demon) don't see the evil coming until some inexplicable stuff starts happening. 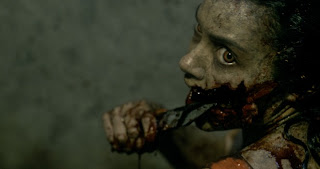 Really freakin' scary. 7 outa 10 (which is pretty good for a scary movie).


Also, ye be warned, this is a graphic trailer. Not for the weak of stomach.