First of all, hello dear readers. Hope you all are well and that you still are maybe reading this when your tv is broken and it's raining outside. Glad to hear that you're still loyal. You keep on keepin' on.

I realize that I haven't written in a month (how embarrassing...) but I hope you will accept my sincerest apologies when I tell you that the reason that I didn't write anything for a full month was because my little brother got his arm caught in the microwave, and my grandmother dropped acid and she freaked out and hijacked a bus full of penguins so it was kind of a family crisis (whoever can name that quote gets a free coupon for Luna Protein bars. Seriously.).

The other night I had the extreme pleasure of getting to see Paranorman in theaters. Now, I should also toss in there that in addition to this rather unusual family crisis I didn't really watch anything new this past month. So I was really excited to get my butt back in the theater to chow down on some popcorn and sip on a mammoth-sized "medium" Diet Coke. So Nick (ooooOOOOoooohhh new bf whaaat) and I decided to see Paranorman. When we were in college we had seen Chris Butler's fascinating take on the hit children's novel Coraline and were both eager to see what Butler was bringin' to the table this round. 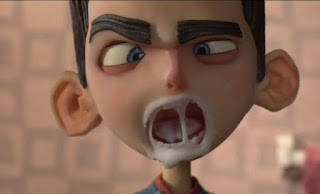 Paranorman is the story of a young boy who can speak to ghosts and, as a result, forms strong bonds with them. But Norman isn't very popular among the living. Taking a daily beating from the school bully every day and regarded as a freak by his peers, he finds solace in zombie movies and talking to his apparitional buddies. At the time the story begins, Norman's hometown is about to celebrate its 300th anniversary with a huge nod to a witch trial which happened at the time of its founding. The witch's curse, legendary in this sleepy town, is said to be set for this very year and with its carrying out, the dead will walk among the townspeople. As Norman discovers the truth of the curse and sets out to stop it, he realizes that maybe zombies and witches aren't always what they seem. 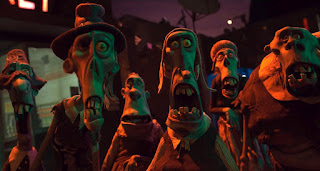 I know, I know. I was shocked too.

If you've seen Coraline, Paranorman isn't worlds apart from it in terms of fantastical theme. Butler seems to have a dark side similar to Tim Burton (Who I thought for about two years was Coraline's creator. Oops.) but somehow a little more accessible to children. Whereas Burton seems obsessed with the macabre, Butler seems more interested in the creepy and the scary but also the turmoil of children (such as alienation and bullying). Paranorman and Coraline both revolve around children being able to sense and interact with apparitions that grownups can't see right away. This special connection between the young audience and the films' focus on children helps make for good child entertainment. But don't be so quick to haul your seven-year-old to this zombie movie. Butler's films seem to hold an interesting edge for anyone 13 and older (i'm surprised they didn't get a PG-13 rating for disturbing images) or else seem to answer to today's seemingly desensitized children. My boyfriend and I, 22 and 23 respectively, were sincerely creeped out and even scared towards the end of the film and gawked at the PG rating. But I guess that's better than scoffing at lame effects and boring zombies.

With humorous elbow-nudge-type jokes and nods to campy horror flicks, Paranorman also really tries to honor old horror films while simultaneously critiquing them and making them more accessible to kids. This keeps the movie accessible to adults as well, and of course to your average horror buff.

In terms of stop-motion, the film is a masterpiece. Between the difficult close-ups and the amazing effects towards the end, it's incredible to see what some people can do with clay. The effort definitely pays off, much like it did with Coraline, and Paranorman is fun to watch even if it's just to look for all the little details of each scene. Instead of creating simplistic characters a la Wallace and Gromit flicks, Butler makes Paranorman caricatured but still realistic enough to include minutia of the people's everyday lives, like Norman's sister's nail polish, the litter in the streets, and even things like Norman's zombie wallpaper. So cool.